Gearoid Hegarty was pointing fingers and spitting fire as he left the field on Sunday and, when you see what he was sent off for, you can hardly blame him.

It was a second yellow card that did for the Limerick man in the end and, like Austin Gleeson before him, that second yellow card was certainly a controversial one. What really will have infuriated the Limerick man though, is the fact that his first yellow just as harmless as the second, leaving him, as Micheal Donoghue put it at the end of the game, looking like a pantomime villain once more.

Hegarty protested his anger to referee Colm Lyons and he protested his innocence to John Kiely but the call had been made and, despite his frustrations, there was nothing he could do.

Back in the studios, Donoghue was of the opinion that Hegarty's reputation preceded him this time around, and looking at those two yellow cards, it's hard to argue with that.

But that doesn't mean there were no arguments.

Gearóid Hegarty receives a second yellow card for following through with his hurl.

Did you agree with the decision? Final moments now.

Highlights coming up on #sundaygame from 9.30pm on @rte2. pic.twitter.com/v1x3oDsEnn 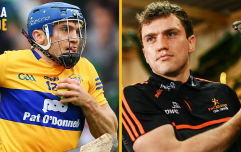 END_OF_DOCUMENT_TOKEN_TO_BE_REPLACED

Because, as it often does, it all kicked off on The Sunday Game as they trashed out the hows and whys of Hegarty's dismissal and, on the subject of his reputation preceding him, Joanne Cantwell seemed to attribute some of the blame to one of the analysts beside her, in Donal Óg Cusack.

It was back in February, after he was shown a red card in the League against Galway when Donal Óg said that it had been "coming for him." The Cork man actually batted for Hegarty this time, blaming the theatrical reaction from Clare's Aaron Fitzgerald but it was his follow up comment that sent it all off in a tailspin.

"The Clare player makes a huge deal out of it," said Donal Óg.

"But this is my point all the time, there is no need for it. There is no need to swing like that. He is one of the greatest players I've ever seen. He makes the impossible look simple but he is asking for it by getting involved and flicking back like that." 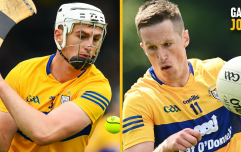 END_OF_DOCUMENT_TOKEN_TO_BE_REPLACED

Joanne Cantwell then asked if Donal Óg's tone and his assertion that Hegarty is "asking for it" is the reason the half forward has such a reputation. That was a question Donal Óg wasn't one bit happy about.

"Joanne I'm only talking about what I see on the television. That is (as an anylyst) what I'm meant to do."

All in a day's work.

You may also like
2 weeks ago
"I don't think that is fair and impartial" - Brennan questions optics of a Limerick man on The Sunday Game
2 weeks ago
No angels on both teams but no babies either
3 weeks ago
Darach Honan: I would say Limerick have gotten away with an awful lot more than they've been called on
1 month ago
Welcome to hell with one of the toughest corner backs in hurling
1 month ago
"It's becoming nearly embarrassing watching hurling at the minute" - Calls for hand-pass rule change in hurling
1 month ago
"You'd nearly want a telescopic loader to try and stop him." - Duggan back with a bang
Next Page