Major boost for The Tribesmen, here.

Galway have made just one change to the team that defeated Clare by a point in the All-Ireland semi-final replay, and it is a significant one.

Galway manager Micheál Donoghue saw his side battle through against The Banner to reach the final, on Sunday, and to be in a position to reclaim the Liam MacCarthy Cup. Niall Burke helped the westerners get over the line in that game but he must content himself with a supporting role this weekend.

Minutes before the Galway team was revealed for the final, Limerick named an unchanged 15 for the game. 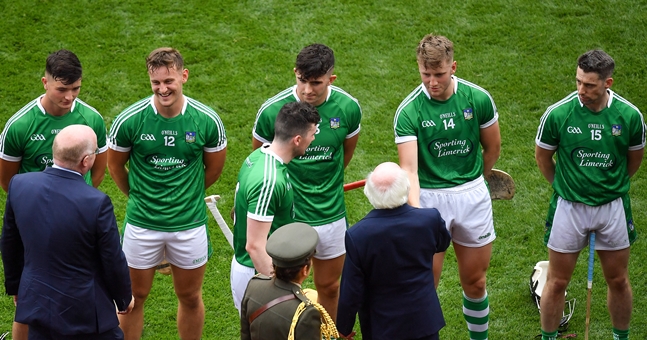 John Kiely is the first boss to step up and officially announce his team. The All-Ireland Hurling...

The inspirational Gearoid McInerney has recovered from a leg injury to start in the centre back position, with Joseph Cooney heading back into the Galway attack.

Padraic Mannion is named in the half-back line but it must be noted, he played in a much more advanced position against Clare.

James Skehill starts in goal with Daithi Burke, Adrian Tuohy and John Hasnbury his immediate screen. Harte is named in the half-back line with Mannion and McInerney with Johnny Coen and David Burke named No.8 and 9.

Cooney rejoins Joe Canning and Johnny Glynn in the half forwards while Conor Whelan, Conor Cooney and Cathal Mannion start as full forwards.

The final throws in at 3:30pm in Croke Park this Sunday, August 19.


popular
The SportsJOE 12 o'clock quiz | Day 110
QUIZ: Name every player that's scored three or more Premier League hat-tricks
The SportsJOE 12 o'clock quiz | Day 109
'ROG was the kingpin... he just wanted to win, win, win' - Barry Murphy
"Some of the guys have put a lot into it" - Felipe Contepomi confident Leinster can start fast
What Leinster's strongest XV looks like when everyone is available
SportsJOE 2000s Football Quiz | Round 9