The Galway hurlers are playing a very special, charity game on Thursday

This should be a fantastic occasion.

Galway's senior and minor hurlers did the double, last Sunday, when they clinched All-Ireland titles at Croke Park within hours of each other. The party has not stopped since.

"Last night was some craic, yeah, it was great craic actually. It hasn't sunk-in, yet. Give us a few days on the beer and it might sink in then."

END_OF_DOCUMENT_TOKEN_TO_BE_REPLACED

However, both the senior side and the minors will get back to what they really do best - hurling - and all for a great cause.

Sunday saw some tremendous scenes as Galway captain David Burke paid tribute to late hurling legend Tony Keady, who was man of the match in the Tribesmen's last All-Ireland victory [1988] but who passed away in August.

END_OF_DOCUMENT_TOKEN_TO_BE_REPLACED

Keady's family celebrated the capture of the Liam MacCarthy Cup on the Croke Park pitch and Galway talisman Joe Canning made a point of staying close by when Burke was giving his victory speech.

On Thursday evening, at 6:30pm, many of Galway's newly crowned All-Ireland champions will take part in a game organised to raise money for the Keady family.

The match will take place at Kenny Park in Athenry and admission for hurling fans is €10.

Current and former players - stars of Galway's hurling past - are set to feature and fans will hope to see these two bucks lining out for a puck about. 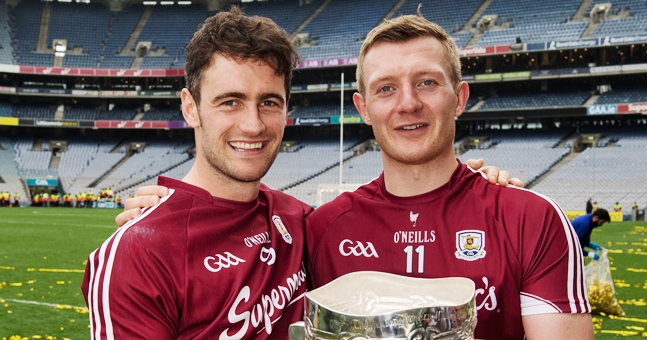 It sounds like a great evening and it will be good for the champions to blow off some cobwebs after a few nights' celebrations and song.

We'll add more details as we get them.


popular
Sean Dyche set to be named Everton manager after Marcelo Bielsa talks break down
Roy Keane flatly rejects longstanding perception of ex-Man United midfielder Paul Ince
Allianz National Football League Round 1: All the action and talking points
Conor McGregor hit by car ‘at full speed’ while cycling
Roy Keane leaves ITV pundits in stitches after Pep Guardiola's pre-match interview
Quiz: Identify these 15 football clubs that are not named after a place
Study shows rugby positions you are most/least likely to be injured playing
You may also like
2 weeks ago
Moran and Bradley and Cooke show that it's hard as ever to beat the big man in midfield
4 weeks ago
How many of the 65 county senior champions for 2022 can you name?
2 months ago
"I appreciate Moycullen now more than ever" - Cooke's American lifestyle from a Moycullen base
2 months ago
GAA JOE Team of the weekend
2 months ago
Results from all around the grounds on a blockbuster day of provincial action
2 months ago
GAA JOE Team of the weekend
Next Page