Injured? Hungover? Don't fancy it? Sure you're only a phone call away from freedom.

Club games get called off for all sorts of loose reasons. Yes, some solid ones too but others, let's say, convenient. The opposition ask you at the start of the year can you swap dates because a stag do is going to screw them over; naturally you say no, sniffing out a handy two points; naturally, they flick through the obits every day in the build-up to the game looking for anyone who might be the third cousin of a selector's auntie.

END_OF_DOCUMENT_TOKEN_TO_BE_REPLACED

So when the message went into the club WhatsApp group to find out how the junior side got on, people were still stumped. 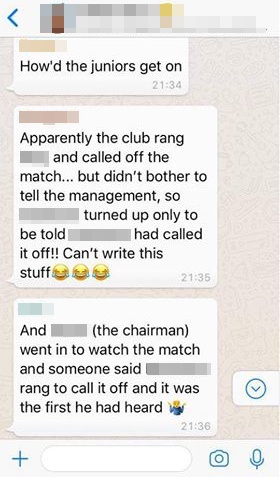 So players from one team showed up - the team who were said to have actually called to get it off. Needless to say, it didn't take place. And, still, nobody seems to know why or how.

Clubs in Wicklow are going to have to start initiating passwords for such events.


popular
"I remember someone saying, 'This guy's the best of the lot of them. Just wait for him'" - Brian O'Driscoll
"I trained with a guy that was born in 2004 the other day. We reckoned Earlsie could be his father!" - Peter O'Mahony
Nigel Owens on most annoying players to referee (three of them are Irish)
Six All Blacks but no Ireland players in world's top 20 list headed by Antoine Dupont
The story of the GAA's greatest ever minor
"I asked one question and lads slagged the arse off me!" - Johnny Sexton on Roy Keane chat
Longford GAA movie explores the tale so many young footballers can relate to
You may also like
3 months ago
Wicklow captain raises the roof with rip-roaring speech from the steps of the Hogan Stand
1 year ago
"If we can do the job on Saturday, then obviously that would be the pinnacle of it all"
1 year ago
QUIZ: Which is the correct GAA crest?
2 years ago
12 years a Wicklow star, newborn only drove Fusciardi on
3 years ago
Eight county games taking place and the last club weekend of the year
3 years ago
Despite losing on Sunday, Wicklow champions lifted the pub with GAA's Allez Allez Allez
Next Page