After football's crack down, hurling getting tough on handpass now too for the sake of it

No matter what had gone before, it wouldn't have made a blind bit of difference anyway.

Up by four and cruising, Clare haven't exactly been firing either. But four is a dangerous lead in hurling and Tipp need to be careful.

One champagne pass follows another though and suddenly they're all sucked in to this glorious passage of play that sends young forward Jake Morris through on goal. His shot cannons of the post and instead of the ball going dead, it's in Clare hands now. 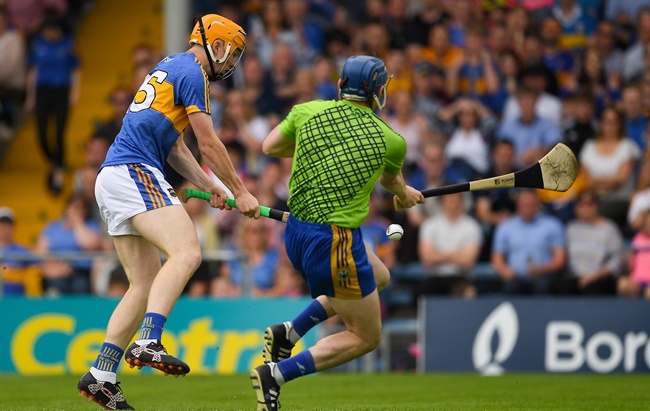 Tipp have over-committed, the Banner have them on the run.

The ball comes to John Conlon's wing and every Clare head in Semple Stadium smells blood now. Closed down by two Tipp defenders, he bullocks one out of his way but Ronan Maher is up on him.

Podge Collins gallops off the shoulder roaring, with clean, green acres open in front of him and Conlon knows that if he puts it out in front of Podge, the goal is on.

It's a matter of milliseconds now in the fastest field game on earth.

Just in time Conlon releases the ball into Collins' path and he hares through to set up a goal. Clare go on to win the game.

END_OF_DOCUMENT_TOKEN_TO_BE_REPLACED

Conlon threw that ball. In a slow-mo replay, it's clear as day.

But not one Tipperary supporter or player was complaining about it that day. The referee didn't notice it either, how could he have?

The sliotar, the game was moving too quick and it wouldn't even have mattered if he was told to 'clamp down' on the throw balls in a meeting before the game, because he just wouldn't have seen it anyway.

Former All-Ireland winner Conor O'Donovan demonstrates the use of the illegal handpass in hurling. pic.twitter.com/mG7U3o2QAM

So on Tuesday, the Referee's Development Chairperson Willie Barrett told RTÉ that it is, from now on, within referees' remit to "eradicate" that from our game now.

Just day's after football's handpass rule went to the scrap yard, this discussion seems a little bit pointless because throw balls are going to keep on happening in hurling and though referees might occasionally blow for them - rightly or wrongly - the increased pressure is only going to lead to them becoming too fussy about it, leading to more frees on the other side of it and slowing the game down.

And you'd better believe that the complaints would be a lot louder than the Conlon incident if a player was pulled for throwing if he actually had handpassed...

popular
In defeat, Jerry Kelly dies with his boots on in coming of age final display
The SportsJOE 12 o'clock quiz | Day 286
QUIZ: You have 30 seconds to answer this one tricky football question
SportsJOE 2000s Football Quiz | Round 11
You'll have to be a diehard fan to get 20/20 in this Liverpool players of the 90s quiz
"Djokovic is a tool" - Tennis world turned upside down in day of days
"I knew I didn't have the pace or strength, it was just get it and try kick it left or right"
You may also like
2 weeks ago
Waterford dealt big blow as Stephen O'Keeffe steps away for 2021 season
1 month ago
"It's going to be very hard to see anyone laying a glove on Limerick for a while" - JJ Delaney
3 months ago
Wild scenes at Semple Stadium as Kiladangan score last gasp stunner
5 months ago
Austin Gleeson sent off again as Mount Sion reach Waterford semi-final
6 months ago
The former Dublin minor star that led Ireland to Grand Slam glory
1 year ago
Fancy a lunch-time puck around?
Next Page