The mighty men of Mullinalaghta made history on Sunday afternoon. One of the smallest clubs in Ireland, the 5/1 underdogs were supposed to be whipped out the gate by one of Ireland's biggest.

Those who gave them a chance were few and far between but the Longford lads never stopped believing. Belief is a powerful thing and that was what brought them to the promised land of a Leinster championship. 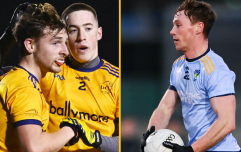 END_OF_DOCUMENT_TOKEN_TO_BE_REPLACED

From the wilderness to the centre of Ireland, they put themselves and their little place on the map through their journey and now they have every other small club in the country using them as an example and believing that they can go onto achieve something amazing too.

After speaking so well in front of the people of Mullinalaghta, they let Mickey Graham know all about the decision facing him now 🤣 https://t.co/fcLt0wJah2

Fittingly, they were welcomed home to a heroes' reception in their half-parish on Sunday night, the bonfires lit, the fireworks out and their whole parish in awe.

END_OF_DOCUMENT_TOKEN_TO_BE_REPLACED

Before the celebrating started, however, the team had it in their minds to carry out a ritual that they've been following ever since they achieved the first breakthrough of this amazing run in their county final win in 2016.

The lads don't forget their humble beginnings, they don't forget where they come from and before they did anything, they made their way to the village cemetery for a ceremony remembering all those who have gone before them in Mullinalaghta.

So they came home to the half parish to be welcomed like this on an amazing night but the new Leinster club champions went firstly to the village cemetery in Mullinalaghta for a private event - remembering all those who went before them in search of victory. Extraordinary gesture pic.twitter.com/6Yxqj5hson

That's the type of spirit, togetherness and unity that made this unbelievable feat a reality. That's class.


popular
Man United could be blocked from playing in the Champions League next season
Ireland team vs. France: Form players rewarded and a welcome return
Eight players to watch in tonight's Sigerson Cup semi-finals
French media's opinion of this Ireland team becomes clear as vital clash nears
Clive Woodward happy to 'eat humble pie' after bold comments about Ireland
Lionel Messi makes decision on Barcelona return
"I should have been more mature" - O'Sullivan's injury trail a cautionary tale for Sigerson casualties
You may also like
1 year ago
Longford GAA movie explores the tale so many young footballers can relate to
2 years ago
QUIZ: Which is the correct GAA crest?
3 years ago
Injury and the odd soccer regret, but Longford's finest is delighted to be back with her first love
3 years ago
Dublin beat Longford by 26 points as Wexford still on a buzz
3 years ago
"It seems very cruel on him" - America ruling very harsh on GAA players
4 years ago
"After training there’s tea and sandwiches, and that rotates around every family in the parish"
Next Page