"I nearly jumped out of the stands!"

With four minutes to go in Sunday's tightly contested All-Ireland Football Final, referee Sean Hurson made a call that surprised many, given how common an occurrence the coming together was. He awarded a Kerry free that signalled the beginning of Galway's demise.

As Galway's John Daly fetched the ball off the ground, following a hand-pass from Finnian Ó Laoí, Killian Spillane came in to pressure him. Daly slipped but regained his footing. With Spillane all over him, Daly grabbed at his arm then broke free. 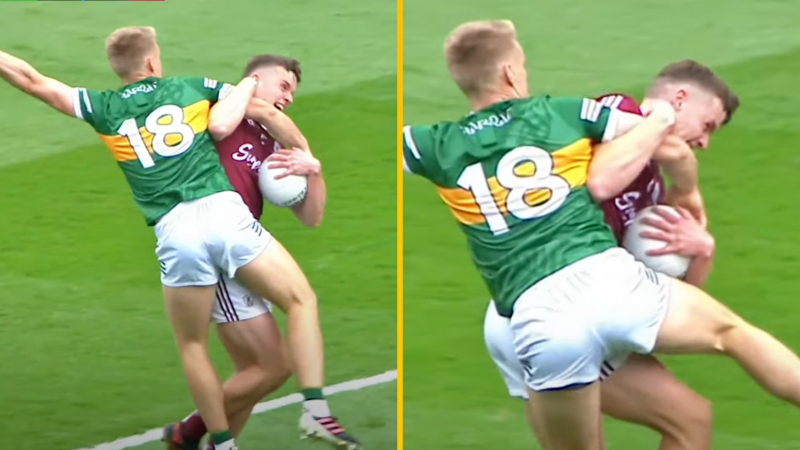 There were howls of disapproval from the Galway faithful, and while RTE's Darragh Maloney contended that Daly may have been attempting to pull Spillane off him, his co-commentator purred his approval.

"Absolutely outstanding call by referee Sean Hurson," declared Kevin McStay. "You see it so often but refs, sometimes, don't have the nerve to call it."

END_OF_DOCUMENT_TOKEN_TO_BE_REPLACED

Sure enough, David Clifford curled over a free and Kerry never looked back.

On the latest episode of The GAA Hour [LISTEN from 23:25 below], former Galway star Finian Hanley went back over the final with Darran O'Sullivan and Eamon McGee. During that chat, Hanley conceded a valid point about that contentious free. 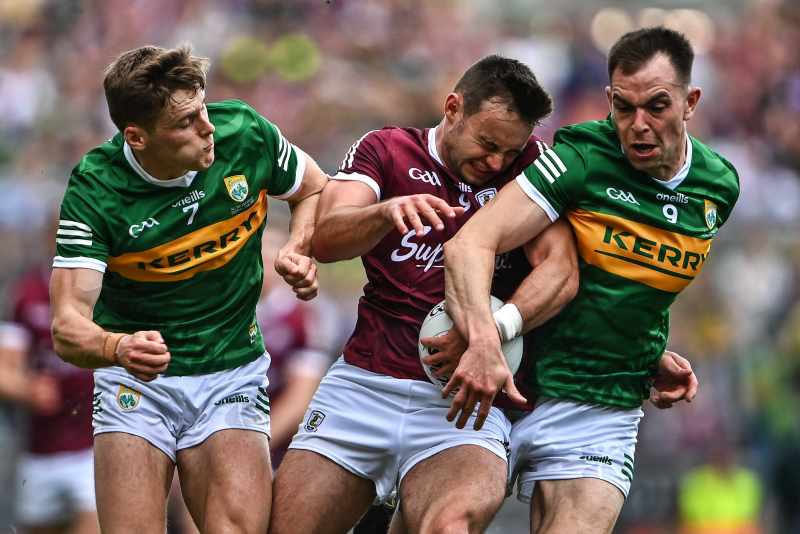 Cillian McDaid of Galway is tackled by Gavin White, left, and Jack Barry of Kerry. (Photo by David Fitzgerald/Sportsfile)

'To be fair, it wasn't the most popular decision'

END_OF_DOCUMENT_TOKEN_TO_BE_REPLACED

The Kerry free for David Clifford was, by no means, simple. With the flags around Croke Park swirling, the Kerry talisman was out by the right-hand touchline but his kick was true and it sailed over.

"It was one of the best frees we'll ever see on the right-hand side, in the second half of an All-Ireland final," said Finian Hanley. Asked about the awarding of the free, Hanley, Darran O'Sullivan and Eamon McGee teased it out.

McGEE: I thought it was a Kerry free. Now, it was a big call. You rarely see them given, when a man is coming out [of defence] with the ball.

HANLEY: It was a big moment in the game.

O'SULLIVAN: And they're never given.

HANLEY: It was 0-16 all... if you are talking about turning points, though, I think Gavin White's shoulder on Cillian McDaid [pictured above] wasn't a free. So, it evens itself out. I'm sure Padraic Joyce is pissed off, and all that, but you need to look at the whole game. I thought Gavin's shoulder was fair.

Galway boss Padraic Joyce did disagree with the Sean Hurson call, in his post-match briefing with reporters at Croke Park.

Following the game, on Sky Sports, retired forwards Peter Canavan and Kieran Donaghy agreed with Sean Hurson on that Kerry free that Clifford slotted over. Former Donegal boss Jim McGuinness disagreed, though, and argued that John Daly was trying to be positive and get up the field.

Whatever the merits of that Kerry free, Hanley's concession that Galway got a soft one, after that White shoulder on McDaid, may soften some coughs.