"It’s an easier life in goal, you’re not waiting for some fella to give you a box in the jaw"

The year was 1991 and Cake, this cocky, confrontational and class corner forward was the top scoring attacker in the Roscommon club championship. Martin McDermott had seen enough to bring him into the county senior team but between his exploits as a budding soccer goalkeeper and a troublesome back, the outfield dream died.

Probably for the best.

"Back into goal for an easier life,” Curran says, “I’ve a big enough nose and part of the reason for that was getting hammered as a young fella, and getting sent off a couple of times too for giving it back. You decide it’s an easier life in goal, and you’re not waiting for some fella to give you a box in the jaw.” 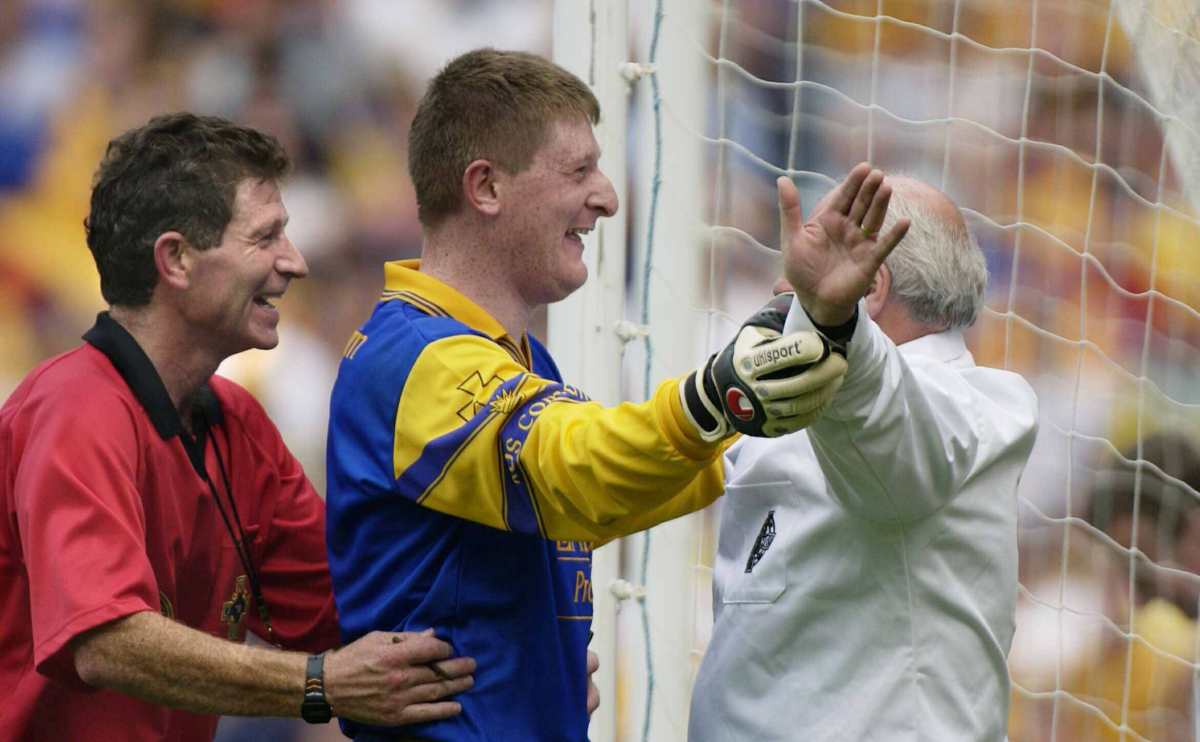 That’s Cake. He’s drinking a pint of Guinness from his Roscommon home during this Sunday night Zoom call, still red and mad as ever. In a good way.

Back to the 90s and this flame headed keeper had a trial with Manchester United. Came home and made a name for himself with Athlone Town, winning player of the year and a Leinster League Cup in ’95.

"After that I had a lot of back problems - some would say from lifting it out of the net too often - but it was more from abuse and bad practice on my own behalf, maybe overtraining. And I settled on goalkeeping from 1998-1999 onwards. I gave up League of Ireland after I got married to concentrate on my career as a Gaelic footballer but for seven or eight years I was on the road as an inter county player and League of Ireland player, and that began to take its toll.”

It may have felt that way but it didn’t look it. Curran remained a mainstay in the Roscommon net until 2004 and in 2013, as a 41-year-old, he won an All-Ireland club title with his second club St Brigid’s. One of the sweetest days of his life. 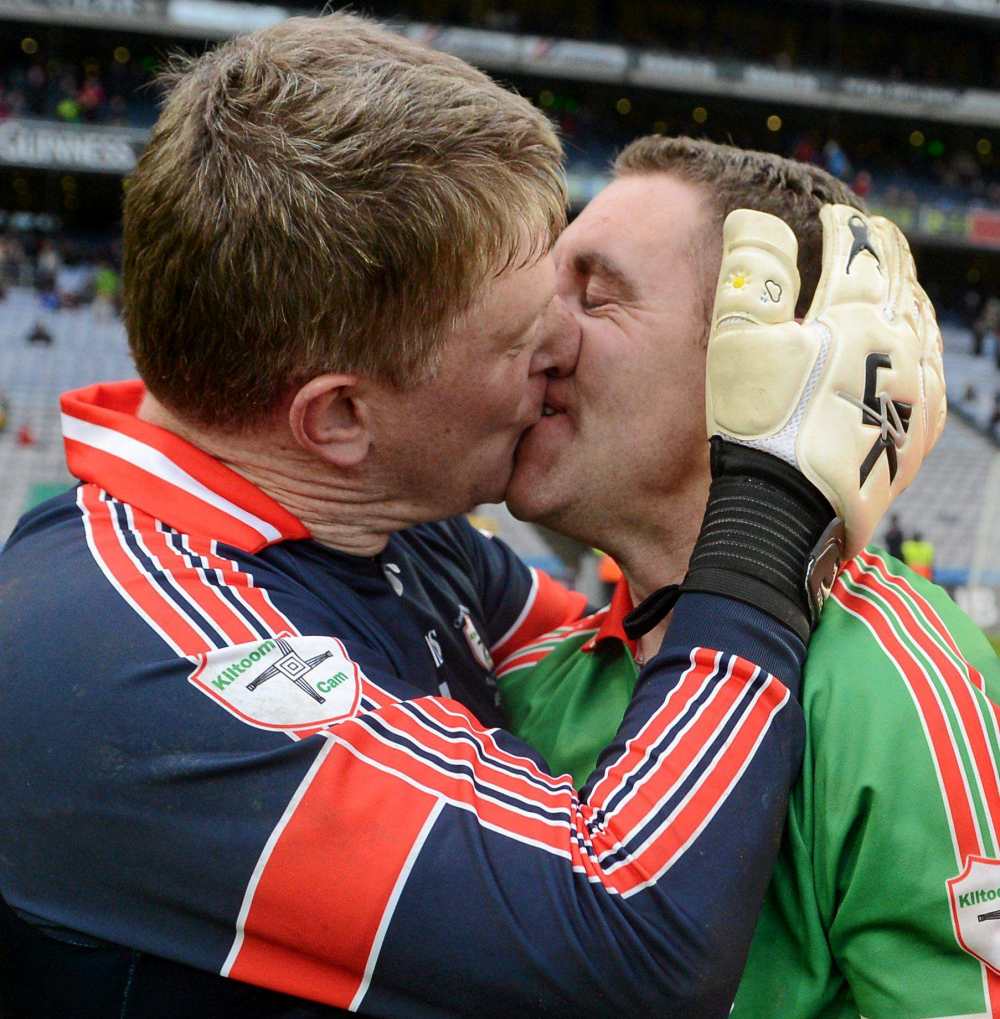 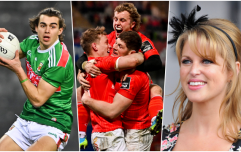 END_OF_DOCUMENT_TOKEN_TO_BE_REPLACED

Not just a marauding mad-man, from chatting to Curran, you’re aware straight away that this fella is sharp as a tack. His business exploits, such as his Global Flood Solutions firm and his brainwaves such as the bristled kicking tee offer confirmation.

From the GAA side, we ask how he would improve things. Where have things gone wrong? Curran’s mind immediately targets these ‘Centres of Excellence’ which he feels stalk every second county with debt, and offer little in the way of player development.

“I’d do what the best organisations would do with the money in that I would invest it in people. This goes back to my FAF methodology, you have your finance, your administration and your football...If you have got your finance you got to make sure you invest it in your football...And the administrators do their job then around fixtures and keeping the county moving.”

“We have got to ask where is the money going, how is it going to be spent to help us develop a group of players over the next 30 years to want to play for Roscommon."

“I can categorically state that it’s not by putting it into concrete at Hyde Park."

Ah lads, Shane Curran's Laochra Gael is going to be something special 👏

"He could save a penalty & score a 45, but at the same time he'd be just as happy to ride a bull into a church!" 🤣pic.twitter.com/YQ1p9FOR1C

"At the moment in this country, every county has this dream of building these super-structures – vanity projects I call them basically. Just take it, from the M50 to Athlone is 45 minutes basically, it’s not that far. I think that we could have municipal areas that would help to solve the long commute to training issue, that there’s a centralised base there that isn’t that far away from any of them.”

END_OF_DOCUMENT_TOKEN_TO_BE_REPLACED

This, Curran feels, could spark an increase in inter-county transfers which he feels could revive some of the struggling counties.

"There are a lot of young players now in the metropolises of Galway and Cork and Dublin.

"Maybe Covid will change it a little bit. But the dynamic will be for people in their twenties to move to urbanised areas to experience life, to experience work, etc."

“And there aren’t enough places in the Dublin panel for these players. And whether they’re from Roscommon or whatever heritage they have, I believe there should be an outlet for them, whether that’s coming and playing for whatever county they want.
“I don’t buy into this kind of mantra: ‘the GAA is all about one club, one life’ – all that rubbish. I’m from Castlerea, I moved to St. Brigid’s, which is 40 mile down the road. I know players who have moved around the counties.

"For example if Roscommon or Westmeath or Offaly, if some fella comes out of Dublin and he’s a brilliant talent – like for example Paul Mannion."

Once again, he could be onto something. Thursday night's Laochra Gael won't be boring, that's for sure.

You may also like
1 month ago
"I’d have massive respect for him as a person, but I was very disappointed in that"
1 month ago
"We’re big boys. You just have to pick yourself up. You’ve got to learn the lessons."
1 month ago
The schedule of sport on tv this weekend is a sick joke
1 month ago
The SportsJOE 12 o'clock quiz | Day 296
1 month ago
"I'd say to fellas 'if you bring a friend and they stay playing, we'll give you a prize"
1 month ago
Johnny Pilkington's only crime was having a brilliant sense of humour
Next Page