Former Dublin All-Ireland winner Charlie Redmond has said that every county in the GAA will stand to benefit from Dublin playing two games at Croke Park during this summer's inaugural Super 8 series.

The Donegal county board asked for a meeting with the GAA on Tuesday to seek clarification on how any county may use a ground as both a 'neutral' and 'home' venue with the first round of Super 8 games set to be played at Croke Park later this month.

In this summer's Super 8s the two provincial champions meet and the two qualifiers meet in Croke Park in the first round. In phase two the round four qualifier teams have home advantage and the provincial winners are at home in phase three of the series. 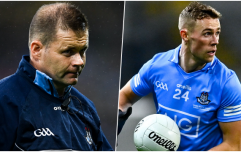 END_OF_DOCUMENT_TOKEN_TO_BE_REPLACED

The GAA acknowledged Donegal's challenge on how a team, namely their opening round opponents Dublin, could play two games at Croke Park but the association also insisted that there was 'nothing in Rule' to prohibit a team from playing two games at headquarters.

Redmond, who won an All-Ireland title with Dublin in 1995, dismissed the notion that Dublin should not play two games at Croke Park and added that every county in the GAA stands to benefit from Dublin playing at Croke Park.

"Dublin will be the team in the Super 8s without a home game," Redmond wrote in his Sunday World column.

"Your home ground is the one where the county board maintains the pitch, tries to improve the facilities for players and supporters, where all the county's inter-county teams can train if they want to.

"None of that applies to Croke Park. All of the above applies to Parnell Park. Dublin choose to play their league matches in Croke Park to get extra money for everyone. The Allianz League receipts are divided by 32."

To Redmond's point, the revenue generated from the extra tickets is not always divided up evenly between the 32 counties.

Dublin GAA have received €15,427,560 more than any other county in coaching and games development grants over the last decade.

The Jacks have not lost a championship game at headquarters since the 2014 championship and Gaa Hour host Colm Parkinson wrote in his SportsJOE column on Tuesday that it's not fair that Dublin can play at Croke Park twice while every other team in the championship is permitted to just one home match.


popular
"I never really cried or got emotional over what I've done as an individual. I couldn't give a s***"
Six golfers that could improve Europe's fortunes at 2023 Ryder Cup
"If I break my wrist, it's on f***ing both of you." - Koepka and Berger act the spoiled child
The FootballJOE Pub Quiz: Week 7
"I was off the grid" - Aidan O'Shea respond's to Mayo criticism after club championship win
'I won The Open by six shots in my home country, but this was the best week of my golfing career'
Garry Ringrose raves about four young Leinster stars to watch this season
You may also like
2 weeks ago
The Mayo crowd in Croke Park could potentially have a big impact on the All-Ireland final
2 weeks ago
GAA make retrospective decisions on John Small and James McCarthy incidents
1 month ago
Mayo have found the road to Sam Maguire and turns out it's on the N5
1 month ago
Aidan O'Shea's reaction to being subbed off against Dublin revealed a lot about his character
1 month ago
"Anti-Dublin bias is the biggest load of b*****ks" - Oisin McConville clashes with former Dublin star
1 month ago
"Have a bit of respect for your teammates" - Aaron Kernan questions the manner of Stephen Cluxton's absence
Next Page