Edgy training sessions may be Dublin's best hope as Leinster rivals, once again, cower at Croker.

It must be a drag to be a Dublin fan - your team destroys all comers in Leinster, plays entertaining football and scores goals for fun yet pundits focus on the negatives. Dubs supporters, they are often told, must not enjoy their team's success too much as the real championship will only begin in August.

Jim Gavin knows greater tests await that Kildare, ever so briefly [15 minutes], posed in their Leinster semi-final, on Sunday.

However, he was right to bristle at RTE suggestions that his team are gaining nothing from punching way above their weight.

As Joe Brolly pointed out, Kerry have dominated Munster for large periods and it has not fared too badly for them, especially when Sam Maguire trophies are being totted up.

Gavin emptied his bench early into the second-half of his side's 5-18 to 0-14 win over the Lilywhites. He is aware of the need to give as many of his talented panel game time. He will also be letting his charges know that the drop in standards, in that half, will not be tolerated.

Keep the foot on the throat or I will find someone else who will.

Gavin must keep an edge to his squad. Feisty training sessions - with spots up for grabs based on performances, and rivals man-marking each other - may be the best way to keep the Leinster lords on top. 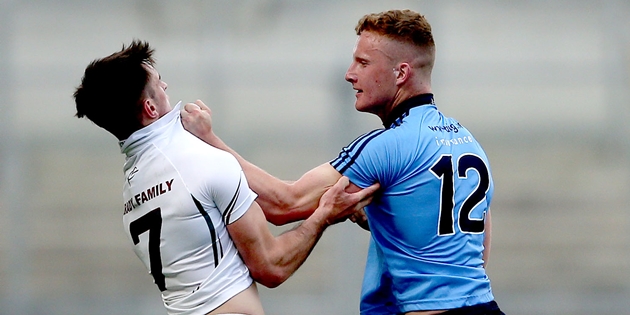 Preparing for Westmeath, rather than recent punch-bags Meath, may actually focus The Dubs more.

END_OF_DOCUMENT_TOKEN_TO_BE_REPLACED

Dublin fans will be immensely pleased that both Diarmuid Connolly and Bernard Brogan were among the points, and goals. The forwards scored 2-3 apiece and were far too good for Kildare.

However, the assured performance of Ciaran Kilkenny was the real positive and bodes well for the steeper climbs ahead.

Kilkenny was a handful all day and breezed in and out of the white, Kildare lines with effortless ease.

He scored Dublin's first two points - his second was a gem - and linked up well with both Brogan and Connolly. All four of his points came in the opening half hour and all were from play.

Then, just as Kildare were pining for their dressing room dressing down, from John Ryan, his clever, fisted pass to Connolly set up the goal that made it a 13-point game at the break.

The All-Ireland quarter finals are not until early August and Westmeath will be eyeing more history-making deeds in between [July 12] but Gavin will be confident that his Dublin side will be ready for whomever emerges to test their mettle.

popular
QUIZ: You have 30 seconds to answer this one tricky football question
The SportsJOE 12 o'clock quiz | Day 286
You'll have to be a diehard fan to get 20/20 in this Liverpool players of the 90s quiz
SportsJOE 2000s Football Quiz | Round 11
Here's a list of 23 people who own a greater share of the UFC than Conor McGregor
Conor McGregor mentions title outsider when quizzed on next opponent
Wayne Rooney story about Memphis Depay shows why he failed at Manchester United
You may also like
3 weeks ago
GAA JOE All-Star Gaelic football team
4 weeks ago
"Cillian O'Connor, amazingly, didn't even flinch at what was said by Philly"
4 weeks ago
"Outstanding refereeing" - courageous ref praised after under-20 final
4 weeks ago
Mutual respect between Fitzsimons and Keegan a stirring sight
4 weeks ago
Dublin and Mayo players clash in tunnel at half time
4 weeks ago
6-in-a-row for Dublin as they beat Mayo again
Next Page