Winning an All-Ireland does not come easy - you are told it is a squad game, 26 men required and all that.

But what about the team behind the squad? The army of physios, coaches, doctors and kitmen who ensure that everyone is as fit as possible and all the players have to think about is their football or their hurling.

The Daily Mail last week made quite a fuss over Pep Guardiola's 16-man backroom team at Manchester City, but in terms of matchday support staff at least, the GAA would appear to be on a level with the Premier League.

The magic number seems to be 23. Both the All-Ireland football and hurling champions had 23-strong backroom teams helping coordinate their moments of glory this year.

There have of course been questions asked about Dublin's war chest and the GAA's contributions towards it in terms of games development funding and other 'operating payments' - €2.1million in 2015.

END_OF_DOCUMENT_TOKEN_TO_BE_REPLACED

However, Tipperary are keeping pace with Dublin in terms of their backroom team, at least, despite a far smaller contribution from Croke Park.

So, who exactly is involved in an All-Ireland winning backroom team? We took a look at Dublin's non-playing staff from the All-Ireland final replay win over Mayo. 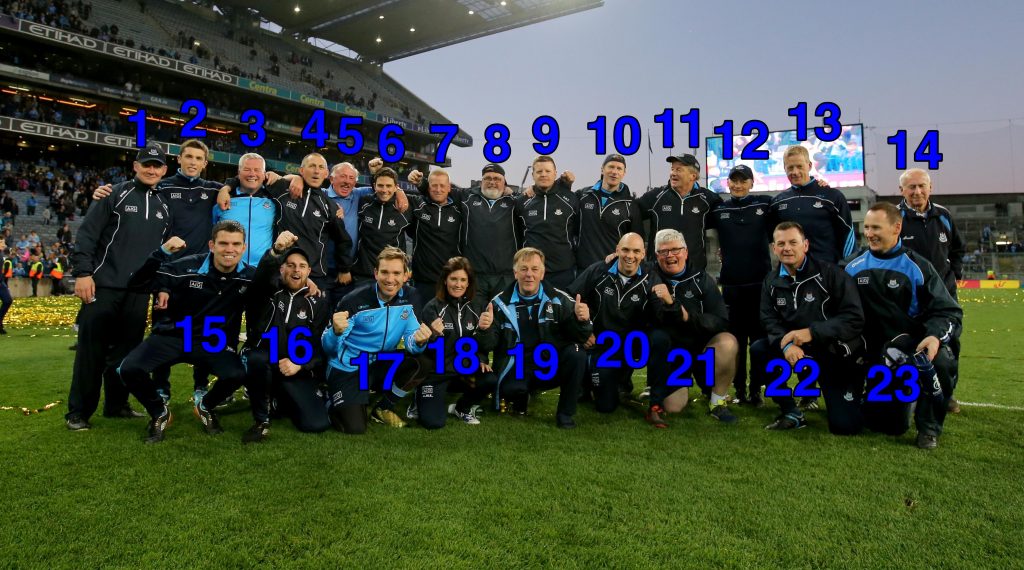 1. Jim Gavin (manager): Since taking over in 2012, the former Under-21 manager has won three All-Irelands, four Leinster titles and four Allianz Leagues.

END_OF_DOCUMENT_TOKEN_TO_BE_REPLACED

3. Ray Boyne (head of performance analysis): On and off, the Ulster Bank employee has been crunching numbers for Dublin teams since 2003.

4. Mick Deegan (selector): Gavin's right-hand man since 2012, he is the manager's voice on the sideline - passing instructions to the players.

5. Jonathan Courtney (backroom team): The former Sarsfields (Kildare) manager is a former colleague of Gavin's in the defence forces.

8. Tony Boylan (logistics): Looks after the transport of all kit and equipment.

9. Davy Byrne (goalkeeping coach): The former Dublin player has the happy task of honing the skills of Stephen Cluxton - who already held the number 1 shirt when Byrne retired in 2002.

10. James Cullen (physio): Working with the Dublin footballers since 2007, he also treats the Irish rugby team having previously been with Leinster for eight years.

11. Shane O'Hanlon (selector): The St Vincent's man is with Gavin since the Under-21 days and has been described by the manager as his 'operations manager'.

12. Jason Sherlock (forwards coach): The former 'Darling of the Hill' was a team-mate of Gavin's and has been working with the attackers for the past two years.

13. Declan Darcy (selector): Famously captained Leitrim to a Connacht title in 1994 before returning to his native Dublin. He and Deegan work mostly with the defenders in training.

15. Bernard Dunne (lifestyle coach): Involved since 2013, the former WBA super bantamweight champion has described his role as “helping Jim in any way I can”.

16. David Boylan (logistics): A son of Tony, he assists with the transport of Dublin's matchday equipment.

What a night #Sam pic.twitter.com/ymMY4OGAcb

17. Daniel Davey (nutritionist): Like other members of the backroom team, Davey also works with Leinster Rugby. The former Sligo footballer tells them what to eat and when to eat.

18. Anne-Marie Kennedy (yoga teacher): Involved since 2013, Kennedy helps the players with breathing techniques and their mobility.

19. Mick Seavers (Dublin county board vice-chairman): The Erin's Isle man was elected in 2015.

21. Frank Roebuck (stats): A clubmate of Gavin's at Round Towers, he assists Boyne in analysing the game data gathered.

22. Seamus McCormack (media manager): The former Erin's Isle footballer brings his Air Corps background to bare as he helps control the huge interest in Gavin and his team.

23. Ciaran O'Malley (doctor): Looks after the matchday medical needs of the squad.


popular
Rangers legend says he and Roy Keane didn't speak during Man United spell
Chris Sutton praises and throws subtle dig at Rangers after Europa League final loss
The coolest customer in hand-ball hoping to carry on the family tradition for Kilkenny
"Certainly not a position that I'd like to be in" - Rory McIlroy on Greg Norman controversy
Rhodri Giggs accuses Gary Neville of hypocrisy over Salford sacking
"I think there are only five Kilkenny players who are guaranteed to start on any given day" - Cody's motivational methods
FootballJOE's Career Path Quiz: #6
You may also like
1 week ago
"I realise on the far side that all of that stuff is not what it's cracked up to be." - 2011 reunion allows O'Sullivan to take it all in
1 week ago
"Jesus, no, if he finds out, he'll think I'm going soft now." - the social life of inter-county GAA players
1 week ago
Buff Egan calls it as Laois skin the Cats in O'Moore Park
2 weeks ago
From a hurler to a super-sub to a starter who's determined to keep his place
2 weeks ago
"It's important to me to get our second team a bit closer to the first team" - Brogan does it for the club
1 month ago
"The players coming through aren’t of the same calibre.” - Christie on Dublin's eventual demise
Next Page