Declan Hannon praised for change of position, and change of heart, that drove Limerick on

Declan Hannon has already been through so much, as a hurler, at 25.

Vaunted as an underage star - for Ardscoil Rís, Mary I and Limerick - Hannon was drafted into the Limerick senior squad at the age of 17, in April 2010.

By 2013, Hannon was well settled within the Limerick starting 15 and playing in an All-Ireland semi-final against Clare. He was on free-taking duties that day but had an off day and Shane Dowling took up the task in the second half. It was not the only reason Limerick lost that day but no-one could tell Hannon that.

The Adare clubman was distraught after Limerick's exit and briefly considered stepping away from the game. Luckily, for him and those that follow, look up to and rely on him, Hannon came back refreshed and renewed after the winter break.

On The GAA Hour, as the reviewed the All-Ireland final's top performers (from 1:06:30 below) , Colm Parkinson discussed Hannon's evolution within Limerick's squad with hurling legends JJ Delaney and Damien Hayes. 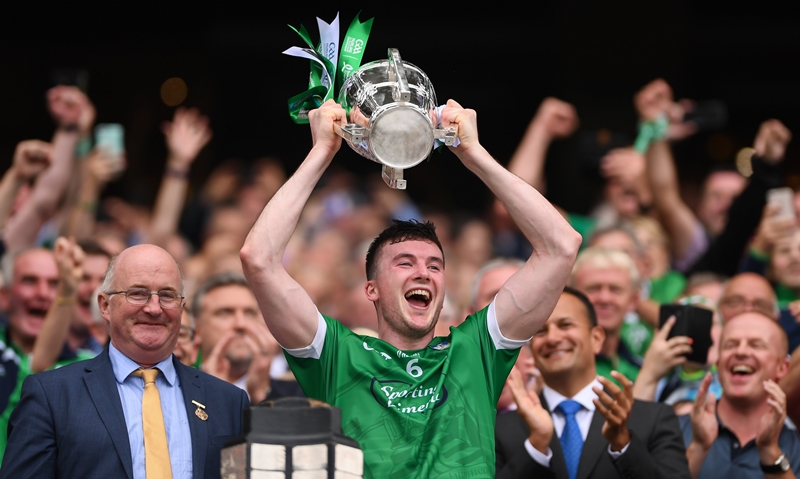 Parkinson declared that Hannon's interception of a ball for Joe Canning, stride forward and long-range point was a 'Jesus, we're here!' statement from Limerick and one that had the Treaty fans believing that the day could be their's.

Delaney, who won nine All-Irelands with Kilkenny, noted that Canning picked up easier scores in the second half as the Limerick captain dropped back to help prevent Galway scoring goals in their comeback effort. He said:

"Talking about Kyle Hayes, Declan Hannon has done a tour of the country, too, for Limerick. He was centre forward, wing forward and midfield, but I think centre back is his natural position.

"He loves spraying ball and he is one of the outlets for the Limerick forwards as well. When he hits in the ball, he puts in the sort of ball that he would have wanted when he was a forward... he puts it in to the forward's advantage. He had a fabulous game and I was delighted for him."

Hayes, a former All Star with Galway, praised Hannon for 'really lowering the blade' and making a lot of important clearances in the final eight minutes.

"He has matured a lot over the last few years," Hayes continued.

You can see why John Kiely appointed him as captain, and why he is so adored in Limerick. The reaction to Hannon at Limerick's victorous homecoming at the Gaelic Grounds tell you all you need to know.

One used to be able to count Limerick's All-Ireland winning captains on one hand.

Hannon is the 6th Limerick captain to have raised the Liam MacCarthy but you get the sense he won't stop with that one glorious Sunday at Croke Park.

popular
"My job at Sky is not to be a cheerleader for Rory McIlroy" - Paul McGinley
Marko Grujic's dad has gone to extreme lengths to block a Liverpool move
QUIZ: Can you guess the football shirt sponsors of these classic 90s kits?
QUIZ: Identify the football club from these 12 crests
"He's found a way to do it. Whether that's good or bad for the game, I don't know"
Man United to submit their first bid for Jadon Sancho but they're £18m short
Sam Bennett's green jersey masterclass got Lance Armstrong talking
You may also like
1 week ago
The Armagh club drawn from 200 homes that dethroned the mighty Crossmaglen
2 weeks ago
"You'd be wondering whether you need to bring the hurleys over or what gear you'd need to bring"
3 weeks ago
More Mahonys on their way as younger brothers take on the mantle in Ballygunner
4 weeks ago
"I haven't heard a thing. And I don't think I will to be honest with you"
1 month ago
"Shaun Murphy sent me a photo with the seven of them, and that was lovely to get"
1 month ago
"There's times I do think I probably have let people down but in fairness, I have got good support from back home"
Next Page