Tullamore were within kicking distance of a semi-final, only for their Leinster dream to be cruelly ripped from their grasp.

They had done the hard part, in surviving an injury-time scramble and when the ball broke to their defender, with four minutes of injury time played and with a two point lead, you could hardly blame him for giving it the old grip it and rip it. Any port in a storm is the well-worn mantra in such frantic circumstances and with the referee about the blow, he was hoping that would be the last kick.

What he didn't know was that, behind him, Naas' star forward Darragh Kirwan was making himself big and as long as he plays the game, he will never again score a goal like it. Kirwan managed to block the Tullamore clearance, seemingly with his legs rather than his hands, only for the ball to trickle back towards the net and into the far corner.

END_OF_DOCUMENT_TOKEN_TO_BE_REPLACED

The Tullamore lads must have been sick.

Unable to believe their luck the Naas boys jumped like they'd won the lotto as, with the referee blowing it up on the next kick-out, their opponents slumped into an unjust sense of dismay. Sport is often cruel but if you find a more heart-breaking way of losing a game and you'll be doing well.

There’s a better clip of it Wooly.. 👍 heartbreaking stuff. Was a game of top quality. pic.twitter.com/66rYOJX5i7 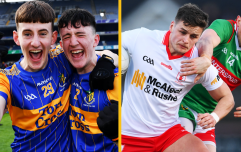 END_OF_DOCUMENT_TOKEN_TO_BE_REPLACED

Unfortunately, as the game clashed with a host of county finals, it didn't get the billing or the attention it deserved but Naas and Tullamore certainly lived up to expectations. Tullamore started the better of the two with Diarmuid Egan scoring the early goal that gave them the foothold. Down the other end of the field, Johnny Moloney and Darragh Kirwan were having an almighty battle with both men having their purple patches.

Kirwan was lively throughout but it was late on, with Moloney moving up the field to score 1-2 for Tullamore, when the Naas man really came into his own to win the game. He ended his day with 2-4, including a goal that will never be forgotten.

So manager-less Naas march on, they're certainly giving plenty of excitement.


popular
Ireland player ratings as Stephen Kenny’s team survive scare against Armenia
When Roy Keane rinsed Mick McCarthy with the mother of all comebacks on first Ireland trip
You'll be doing well to get 20/20 in this 2000s Gaelic footballers quiz
Ireland U21s miss out on European Championships after devastating shootout drama
Peter O'Mahony riled by "petulant s**t" as Munster toasted by Dragons
Jamie Carragher recalls time he deliberately went after Liverpool teammate in training
Grim injury news for Seabelo Senatla after Bundee Aki's red card clear-out
You may also like
6 months ago
Dessie Farrell on why Dublin keep losing games
7 months ago
Daniel Flynn is a rolls royce - he's the most exciting player to watch in Gaelic football
7 months ago
"I've enjoyed every bit of it" - Naas' dual dreamers looking to take one last step
8 months ago
Eoin Doyle gives an honest and sporting interview after Naas journey comes to an end
10 months ago
Emotional scenes in Kildare as Naas win long-awaited county title without a manager
10 months ago
"He'd have a cool head, he'd read the situation and he'd have huge respect in the dressing room" - Callaghan still the man for Naas
Next Page