Corofin clean up in club team of the year awards

Corofin did the three in a row. Liam Silke and Martin Farragher have won their third Club All-Stars in a row.

Unsurprisingly, the kingpins of club football lead the way on this AIB GAA Club team of the year for 2019/2020 with seven of the Galway club's history makers earning the plaudits.

Behind them, the team is stacked with four Kilcoo players, two from Ballyboden St Enda's and one each from Nemo Rangers and Éire Óg.

Bernard Power is in between the sticks for the second year in a row and while Kilcoo youngster Ryan McEvoy can count himself unlucky not to make it into the full back line, he was up against stiff opposition.

Darryl Branagan and Robbie McDaid were shoo-ins for the half-back line while Kevin O'Donovan got in ahead of Naomh Conaill player Anthony Thompson, who had a stellar season for Naomh Conaill.

Darryl Branagan is a Ferrari.

Get that man on the Down teampic.twitter.com/8pRQKPwLiE

Daithí Burke was named in midfield for the second year in a row, this time alongside first time All-Star Ronan Steede. In the forwards, Eugene Branagan is perhaps the hardest done by not to make the team while Luke Connolly also has a case for inclusion. 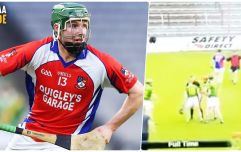 END_OF_DOCUMENT_TOKEN_TO_BE_REPLACED

Meanwhile, it's Ronan Steede, Liam Silke or Darryl Branagan for Club Footballer of the year. Conor Laverty can certainly count himself unlucky to miss out here, the nippy Kilcoo forward having terrorised club defences from Naomh Conaill to Ballyboden the club season long.

Footballer of the Year Nominees


popular
How The Mountain lost 36kg ahead of boxing fight with The Beast
Only old-school fans will get 20/20 in this 1990s footballers quiz | Part 2
The SportsJOE 12 o'clock quiz | Day 186
Sam Bennett's green jersey masterclass got Lance Armstrong talking
QUIZ: Identify the football club from these 12 crests
Rio Ferdinand story about Dwight Yorke conversation shows Alex Ferguson's ruthless streak
"How are we going to get on par with the men if something so simple can't be solved?"

You may also like
1 month ago
"It's not about winning at underage. It's about building players and building people"
4 months ago
“Talent wise he’s as good as there has ever been in Gaelic football"
4 months ago
"The bigger the challenge, the more Fitzy would want to keep them scoreless"
5 months ago
"He had no interest in the trappings of success, he just wanted to achieve it"
6 months ago
St Patrick's day memories: Rural Caltra with one of the great underdog triumphs
7 months ago
Shane Walsh is ready to rule for Galway
Next Page