She doesn't even give the goalkeeper a chance.

Dublin won the All-Ireland senior ladies final for the second year in a row on Sunday and Carla Rowe's cool finishing was the difference between themselves and Cork.

The Clann Mhuire woman got two chances out there, and she put both of them away like she wanted another one.

END_OF_DOCUMENT_TOKEN_TO_BE_REPLACED

One of this Dublin team's greatest strengths is their ability to work the ball through the lines and past defenders at blinding pace, both of foot and of hand.

They move the ball, they scamper themselves and they nearly always have the overlap as a result. They were running straight through and all over the Rebels in the decider and then once they'd ran as far as they had to, all they needed was a finisher. 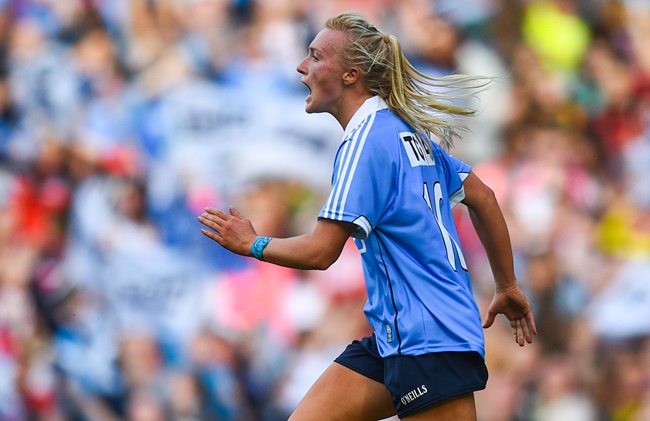 END_OF_DOCUMENT_TOKEN_TO_BE_REPLACED

The half forward got her first chance in the 28th minute of the first half. The scores were level at that stage but Mick Bohan's women were threatening. Noelle Healy was marauding around the pitch like the Duracell bunny and after she'd broke through a few red jerseys she needed support and she had it.

Olwen Carey was there beside her and she dodged the Cork tackler with a deceptive dummy. Cork were in trouble now.

Because with one glance to Carey's left, Carla Rowe was there standing, waiting, begging for the ball. That woman has ice in the veins and she sent another Cork woman the wrong way before putting it out of the keeper's reach and into the corner.

A second goal for Dublin after Noelle Healy scampers through the Cork defence to allow Carla Rowe to score@LadiesFootball ar @TG4TV #ProperFan pic.twitter.com/vvZSCJPmTN

END_OF_DOCUMENT_TOKEN_TO_BE_REPLACED

And she was at it again in the second half just when Cork were rallying and Dublin were in need of a second to kill their opponents off. When they needed her most, she was there, she was doing what she always does and she was making it look like the easiest thing in the world.

This time it was Lyndsey Davey who found Rowe. And again, she was selling dummies, she was composing herself, she was making difficult things look like second nature.

Another goal for the Dubs! Great work from Martha Byrne finished by Rowe for hewer 2nd goal of the game@LadiesFootball ar @TG4TV #ProperFan pic.twitter.com/nUL1uWnKpm

And it was no surprise when she was named player of the match.

"The girls doubled up, they hit them as many times as they could, that gave the forwards the platform to go forward and get the scores that we needed," she said afterwards.

Dublin had many heroes out there, but their blonde bomber was the greatest of all.

And unsurprisingly, the whole of Ireland were raving about her cool finishing.

Some woman to finish a goal is Carla Rowe 👍

Some finishes by Carla Rowe for both goals. Great game this. #DubVCork

Dublin’s forward line is ruthless! Carla Rowe has some eye for goal 👀 #LGFA

Carla Rowe is some finisher. What a goal!! #DublinGaa