Tyrone produced an outstanding display at TEG Cusack Park, Mullingar to get the better of provincial rivals Donegal in Group 4 of the TG4 All-Ireland SFC.

Chloe McCaffrey and Maria Canavan — niece of Tyrone legend Peter — finished with a combined tally of 1-8 as the 2018 intermediate champions defied the odds to claim victory.

The majestic Geraldine McLaughlin led the way for Donegal with 2-5, but Maxi Curran’s outfit will now need to defeat Mayo next week to keep their interest in the Brendan Martin Cup alive.

Eager to make amends for their defeat to Donegal in the Ulster championship — as well as last week’s reversal to Mayo — Tyrone moved into a surprise six-point lead by the end of the opening quarter.

In addition to Maria Canavan, Niamh McGirr and Emma Jane Gervin points, McCaffrey palmed to the net at the end of a 12th-minute move. 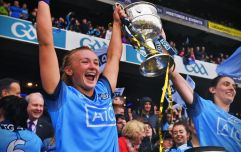 END_OF_DOCUMENT_TOKEN_TO_BE_REPLACED

Nevertheless, with Niamh O’Neill, McCaffrey and Aoibhinn McHugh all on target, Tyrone brought a 1-6 to 1-4 advantage into the break.

Niamh McLaughlin cut Donegal’s deficit to a minimum on the resumption, but Tyrone spectacularly fired back by registering 2-1 without reply.

The sin-binning of Nicole McLaughlin on the half-hour mark had left Donegal hamstrung during this period, but Tyrone also lost McGirr to a yellow-card. This preceded another 1-1 salvo for McLaughlin, in addition to a maiden point for Donegal captain Karen Guthrie.

Although the pressure was now back on Tyrone, they gave themselves significant breathing space with unanswered scores from McCaffrey and two from Canavan. As expected, Donegal ramped up the tension in a frantic finale and a Niamh McLaughlin penalty reduced the gap to two points.

However, Tyrone held firm and McCaffrey’s last-minute free put the seal on their magnificent triumph.


popular
Conor McGregor demands apology from ESPN pundit over Cerrone comments
Kerry vs. Dublin ends in meleé, and a draw
Two giants rise above the fray
Wexford trailblazers go down but father and son show why club GAA is best
David Clifford leaves Dublin for dead to score sublime goal
"I want to be myself... Imitation's not a great thing, you know?"
Charlton want Troy Parrott on loan until end of the season
You may also like
2 weeks ago
Molloy braced for another clash as Sigerson and club fixed for same day
2 weeks ago
Magheracloone: Back from the brink
2 weeks ago
How Monaghan club recovered from losing it all in a tale of determination and unity
2 weeks ago
"Growing up, I would always have been naturally fit"
2 weeks ago
Fancy a lunch-time puck around?
3 weeks ago
Brendan Maher scores a point with a broken hurl
Next Page