"The clubs are at the heart of our sport and we want the club players to have the opportunity to play at the highest level available to them."

Three weeks is all they're asking for.

The Camogie Association's decision to cancel the 2020 All-Ireland club camogie championships has, predictably, gone down like a led balloon with the players and the clubs who have earned the right to compete.

What has grated even more though, is the lack of communication they have received from the governing bodies after repeated efforts from the affected clubs to find a resolution.

It's not every year you qualify for an All-Ire club camogie championship.@ciarastorey90 and @OulartC are one of the clubs who have been training since September, their minds set on the chance.

In the new calendar, the competition is gone with the wind.https://t.co/aFw64biHIG

And so with all 35 clubs seeking to have the championships completed, they have decided to take their appeals one step further. In a press release issued to SportsJOE, the clubs signalled their intention to take the issue before the Disputes Regulation Authority.

END_OF_DOCUMENT_TOKEN_TO_BE_REPLACED

"While we understand and acknowledge that this past year has posed unprecedented difficulties for the Association and for those charged with administering its affairs, the clubs have proposed a reasonable alternative which would allow the championships to be played," reads the press release.

“However, following the decision of the Ard Comhairle of Cumann Camógaíochta na nGael not to complete the Club Championship 2020, a number of affected clubs have been left with no option other than to refer the decision to the Disputes Resolution Authority in an effort to resolve the issue.

Clubs have sent in proposals for how it can be played. @OfficialCamogie don’t even have the respect to engage with us. https://t.co/mCl4oCzmI4

“The clubs are the heart of our sport and we want the club players to have the opportunity to play at the highest level available to them.” 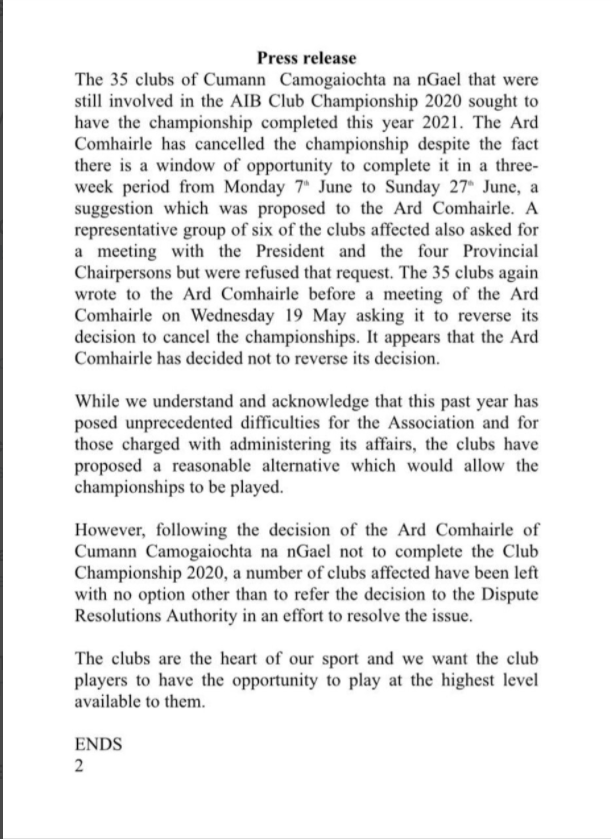 "I'd play it in the back garden if I could. If we have to get dressed in the car and go out and play, I think everybody would be happy to do it.

"Club is where it all begins and where it all ends. You're up there when you're five or six until you're about 40, when you shouldn't still be playing! Winning All-Irelands with your friends and with the girls you grew up with, that means everything to you. The more camogie that can be played the better for everybody. I just really hope they will see where we're coming from."


popular
Gary Neville reveals Man United ignored advice to sign Joao Cancelo
Rhodri Giggs accuses Gary Neville of hypocrisy over Salford sacking
"I think there are only five Kilkenny players who are guaranteed to start on any given day" - Cody's motivational methods
Billy Sharp breaks silence after attack from Nottingham Forest fan during pitch invasion
"County football isn't for everyone" - Down captain Barry O'Hagan hits back at criticism
Erik ten Hag identifies Ajax defender Lisandro Martinez as Man United transfer target
Boris Johnson slams Jurgen Klopp for defending Liverpool fans booing national anthem
You may also like
3 weeks ago
Rory Hayes a class act on and off the field as Clare destroy Tipp
4 weeks ago
"We kind of played a double centre forward to an extent." - The Tipp tactics that gave Limerick a fright in 2021
4 weeks ago
Liam Sheedy and Derek McGrath disagree on throw ball in Tipp-Waterford
1 month ago
Aussie Gleeson shows Waterford what they were missing with game-changer of a second half
1 month ago
Orla O'Dywer becomes first Irish female to win AFLW All-Star as Staunton somehow misses out
1 month ago
Tipperary couldn't ask for any more from Russell who ran himself into the ground
Next Page