When you look at Brian O'Driscoll you're looking at the greatest Irish rugby player of all time and someone in the conversation for all time great.

When you look at Colm Cooper it's the same thing, he may go down as the best player to ever play Gaelic football. 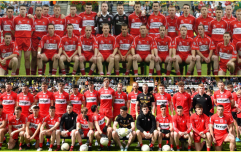 END_OF_DOCUMENT_TOKEN_TO_BE_REPLACED

They're two legends of the game and both of which have been honoured over the years.

Well, Cooper is having a testimonial dinner to celebrate his illustrious career that included five All-Ireland titles and eight All-Star awards but it has caused a bit of a stir.

The reason being is that the Dr.Crokes man is going to financially benefit out of it, Cooper has openly admitted that over half of the funds raised will be going to charity but he will profit from the event which has meant some peers, including Joe Brolly, have questioned the testimonial and the fact it goes against the values of the GAA and its amateur status.

The former Leinster and Irish international has come to the defence of his fellow Irish man and took to Instagram to defend the 'Gooch':

"No idea what all the hoo haa about this legend having a Testimonial is. If ever a man deserved to be honoured with one, this is the guy."

Cooper recently appeared on the Late Late Show and said that Brolly has since been in contact with him to apologise the reaction has gone "overboard" but the RTÉ pundit took to Twitter to refute the claims:

I didn't apologise to Colm for anything I said. I stand by every word. I said I didn't intend him to be demonised as a result.

This is a serious principled debate. I said face to face to Colm he was wrong in doing this. I stand by that absolutely

It maybe is no major surprise that Cooper has the support of Brian O'Driscoll after the Kerryman revealed that attending both O'Driscoll and Ronan O'Gara's testimonials were inspirations for doing it for a GAA player.

The testimonial will take place on 27 October at the Intercontinental Hotel in Dublin.


popular
Roy Keane reacts to Brazil's jubilant celebrations in first half demolition job
World Cup 2022 Day 16: All the major action and talking points
Didi Hamann thought Brazil substitution was "disrespectful" to South Korea
Portugal boss could strip Cristiano Ronaldo of captaincy
Roy Keane handled Gary Neville’s goal celebration as most Irish fans would
Rory McIlroy explains 'falling out' with Shane Lowry that lasted a few years
Roy Keane cracks up ITV pundits with description of Senegal supporters
You may also like
4 years ago
Colm Cooper's body transformation in 15 seasons shows just how bloody good he was
4 years ago
WATCH: Tomas Ó Sé's face as Joe Brolly tries to explain why the Gooch was over-rated
4 years ago
Cillian O'Connor headed for top scorer of all time in senior football championship
5 years ago
"When he starts talking, fellas tend to listen up" - Johnny Buckley on Colm Cooper
5 years ago
Sneaky Colm Cooper free is the Gooch at his crafty best
5 years ago
Colm O'Rourke stirs the shit over Joe Brolly's criticism of Gooch
Next Page