It was a nice break in fairness.

It was a magical few hours yesterday evening when WhatsApp and Facebook shut down, and the phone wasn't constantly lighting up with the same messages from the hundred different GAA groups you are in.

If you've ever been in one GAA group chat, then you have been in all of them, as it is mandatory for every club to have at least one of these characters on the panel.

For anyone who felt like they were missing out, here are the five messages you probably missed out on. 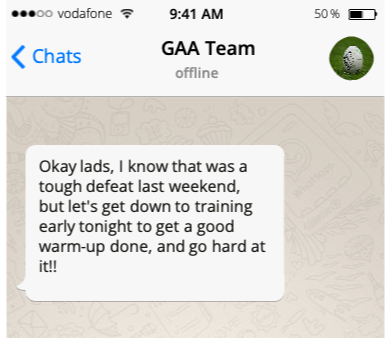 Every team has at least one over-enthusiastic WhatsApper, who feels that a key part of their role in the team is to keep everyone motivated and inspired.

2. The one person who takes it too far 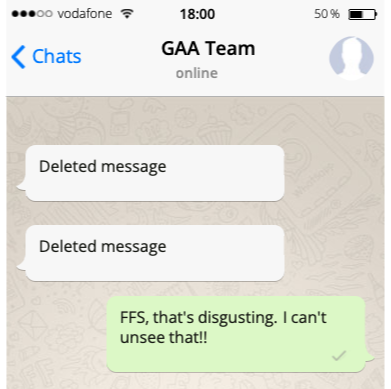 This person has a gallery full of some of the most disgusting content you can ever dream of. Videos, images and voice notes that would put you off your dinner.

3. The 'PlEnTy Of WaTeR oN bOaRd' guy 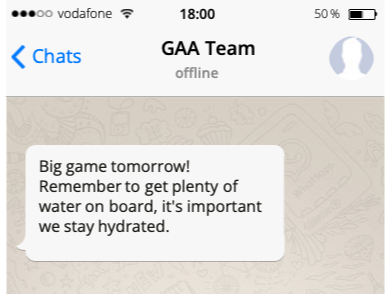 What would we do without this customary message? The whole squad would be throwing up Doctor Pepper at half-time otherwise. 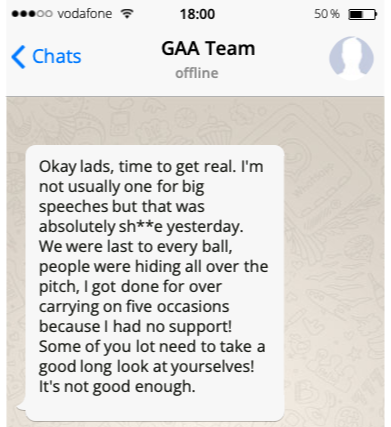 The not-so-accountable dude who wants to make everybody accountable. Maybe if you rant enough in the group, no one can blame you for your own mistakes. 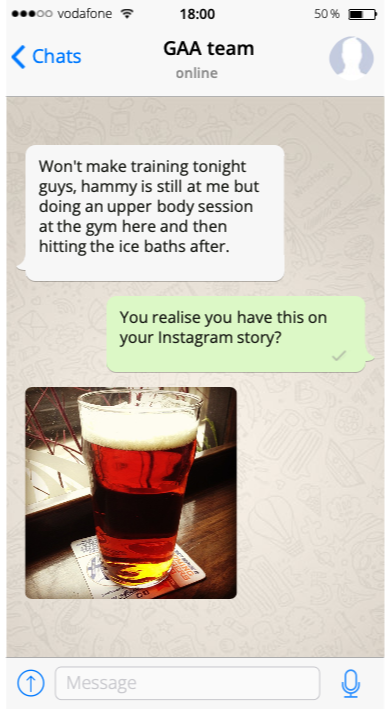 Where would we be without our group chats? In fairness they do come up with some comedy gold, and where else would be better to organise a feed of pints after a game, other than the team WhatsApp?

Still though, it was a nice break while it lasted.


popular
Specsavers troll former Liverpool star for Darwin Nunez headbutt claim
“Players flourished when Roy Keane left” - Rio Ferdinand on why Keane was a 'detriment' to Man United
"To be able to call myself the fastest man in Irish history is just amazing" - Olatunde overjoyed after record-breaking run
The moment Israel Olatunde realised he qualified for the Euro 100m final is what it's all about
Jurgen Klopp reacted like everyone else to Darwin Nunez headbutt red card
Jamie Carragher on the three Man United players Erik ten Hag can't trust
Wexford, Waterford and Kilkenny down some good men as Australia calls
You may also like
1 week ago
Referee mic was trialled during hurling final and proves why it should be introduced permanently
1 week ago
Colm O'Rourke belives that Shane Walsh should at least wait a year before making club transfer
1 week ago
Antrim star saves someones life in the morning and then scores 1-15 for his club in the evening
1 week ago
"I just can’t agree with it" - Darran O'Sullivan critical of Shane Walsh's transfer to Kilmacud Crokes
2 weeks ago
Mayo star scores an outrageous total of 1-17 in Chicago championship game
2 weeks ago
The GAA hasn't gone away you know - Some great games on TV this weekend
Next Page