Rachel Monaghan wasn't even born the last time her club competed in an All-Ireland senior club camogie final. Mullagh's last big day out on the national stage came in 1993 when the Galway side lost out to Glen Rovers of Cork in Ballinasloe. The forward admits that day 22 years ago is a big feature of their build up to Sunday's final with Oulart The Ballagh in the AIB GAA All-Ireland senior camogie club decider,

'I was born in 1994. All I hear is talk about it but I never got to see it.  A lot has been said and the players give us advice on how they did it in 1991 when they won the club's only All-Ireland title. They're guiding us through it and we're taking in their advice. There's also a family connection as Karen Kennedy's mother Mags was also part of that team from 20 years ago.'

END_OF_DOCUMENT_TOKEN_TO_BE_REPLACED

Mullagh weren't supposed to be in this year's All-Ireland final. They began the season without a trainer, and began organising sessions among themselves. It seemed highly unlikely that they would even reach a county final, yet alone be involved on Sunday, but Monaghan says once things clicked it all came together,

'Last year we didn't do as well as well as we planned and we set a goal at the start of the year to win every game and try and reach the county final. At the start of the year we didn't even have a trainer and we were just training among ourselves or whatever and then eventually we got at trainer and manager and they got us to the county final, through the All-Ireland semi and then All-Ireland finalists.'

The introduction of Tom Tierney, who is the husband of club captain Colette Glennon, as well as Packie Dervan, Nigel Murray and Eugene McEntee in the backroom team helped the turnaround in the club's fortunes. McEntee is a former Portumna hurler who claimed four All-Ireland titles, while Dervan is an All-Ireland winner from 1992 with Kiltormer. Monaghan feels that the management brought one key ingredient the club had been lacking for a while.

'They're the best management team I've ever come across. The leadership and communication between them all is unbelievable. Listening to each other means we make less mistakes on and off the pitch. Lack of communication harmed us before.'

END_OF_DOCUMENT_TOKEN_TO_BE_REPLACED

Both Mullagh and Oulart The Ballagh share similar DNA in the in the make-up of their squads with hardened veterans mixed with younger players. Monaghan is one of four Mullagh players currently attending college in Athlone while the club also sees players travel from Dublin and other universities across the country for training and challenge games. The 20-year-old says complaints are at a minimum,

'When you know you're in an All-Ireland final you have no bother travelling. There's four of us here in Athlone and there's no bother. We all share lifts and no one has complaints going down. All the journey is consumed with talk of it.'

The forward is one of a number of senior inter county Galway players sprinkled throughout the Mullagh side. Sarah Dervan, Sinead Cahalan, Aoife Donohoe and Karen Kennedy all lend an edge of experience to the Connacht champions. Despite her relative youth Monaghan admits there is pressure on her and the other inter-county players to raise their game for their clubs after playing for the county,

'There would be a bit more expectation. People think you have more experience but I think it's a team effort and it's not just the few people that do play county. It's the whole panel of players - subs and everyone - we all have to make an impact.' 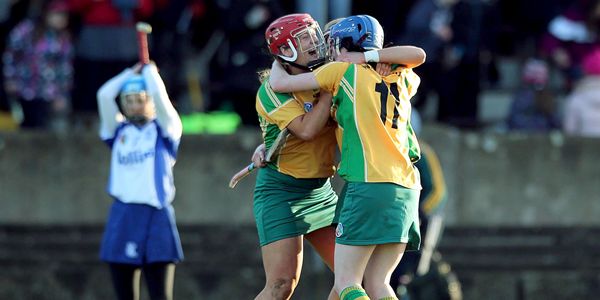 Monaghan also feels that the key difference between club and county is the standard that each player sets for themselves and how the responsibility is on the entire starting 15,

'Leadership is the key difference. There are always different people on different days that show leadership and that's what a team needs. You need everyone, not just one or two, but the full amount of players. You've been playing with these players since you were small and you know them so well. They're family to be honest.'

If Mullagh were surprised to have taken the Galway title then there was an earthquake in the camogie world as they disposed of three-in-a-row chasing Milford. The Cork side were hot favourites for the semi final earlier this month with the challengers massive underdogs. However, despite trailing by 0-8 to 1-2 at the break, a crucial second half penalty from Monaghan set the Connacht champions on their way to a two-point win,

'Absolutely the best feeling ever. It only sunk in a few days later.There was immense satisfaction to be honest. On the day we were the better team but we went in as massive underdogs. Coming up to to half time we were down three points. At half time in the dressing room we said that we had nothing to lose and we'd give it our all and second half is when we play best and the last 20 mins we gave it hell for leather and came out with the reward.'

It's an attitude that the 20-year old student will hope her side can bring to Sunday's final in Croke Park. The Wexford side have dominated Leinster camogie over the last five years but have only one All-Ireland title to their name. They also carry many familiar names to even those outside of the camogie world such as Ursula Jacob and Una Lacey. Monaghan sees no reason why they should change what to date has been a successful approach in their journey to the All-Ireland Final.

'We've heard a lot about them. We have our players to stop any of their names no bother. You have to worry about the whole team, not just the high profile names of Jacobs' or Laceys. We just have to go in with same attitude. Just because they've had their All-Ireland a few years ago. This is our first time as team together to try and get an All-Ireland title. We've changed nothing, we've done the same training and we'll approach like we did the Milford game.'

The 20-year old doesn't do nerves and she feels that her playing colleagues won't be affected by walking out in Croke Park that will only by at a percentage of its full capacity. She feels that the players focus should be on the game and not the venue,

'It's a normal day going out into another field. Some people might think its a different ground but once you do the warm up and get used to the surface then it shouldn't affect you during the game.'

Some clubs wait a lifetime to claim an All-Ireland club title. In Rachel Monaghan's its her entire life with a few months thrown in. The Galway side will be underdogs once again on Sunday but what does she think can prove the difference in lifting the Bill Carroll for her side.

'Hard work to be honest. What we have always done. In the semi we never gave up. We played our own game and we never gave into Milford and never gave up. The hooks, blocking and everyone put in their bodies. No matter where the ball was there was bodies in the way and  the scores came off eventually.  Please God Sunday we'll do that again.'


popular
Roy Keane reacts to Brazil's jubilant celebrations in first half demolition job
World Cup 2022 Day 16: All the major action and talking points
Roy Keane handled Gary Neville’s goal celebration as most Irish fans would
Portugal boss could strip Cristiano Ronaldo of captaincy
Rory McIlroy explains 'falling out' with Shane Lowry that lasted a few years
Didi Hamann thought Brazil substitution was "disrespectful" to South Korea
Roy Keane cracks up ITV pundits with description of Senegal supporters
You may also like
2 years ago
Hard to argue with Club hurling team of the year as Ballyhale and Borris-Ileigh dominate
3 years ago
'The Iceman' inspiring Neil McManus to get the best out of himself and the Glens of Antrim
3 years ago
The club that started the year with no manager and ended up in an All-Ireland final
4 years ago
Quiz: Which classic club GAA player are you? Take the test to find out
4 years ago
Dr Crokes have a simple way to produce good footballers but not enough clubs do it
4 years ago
The best club football 15 in recent history
Next Page