A fierce collection of Ulster tough-nuts and one Dub

Aaron Kernan may have called time on his career as an Armagh footballer last year but there's little doubt the Crossmaglen man was one of the finest players of his generation. The wing back saw off many opponents in his 11-year career and anyone who crossed his path wasn't going to forget the immensely physically strong half back.

When selecting his best 15 to have played with he's gone for a fairly strong Ulster contingent with just one man from outside of the north at top of the left. 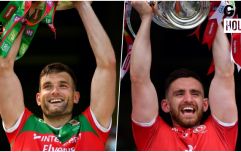 END_OF_DOCUMENT_TOKEN_TO_BE_REPLACED

He almost went full 'Karl Lacey' by selecting an entire Ulster XV but Bernard Brogan does make the cut in corner-forward.

If you're looking for a team with a steel fist inside a velvet glove this would more than fit the bill. Kernan is so much in awe of the players he's lined up at club, county, college and with the Inter-provincials series as well as at international level he's gone and left himself out.

If we could line them up against Darran O Sullivan's XV it would be pure box office.


popular
The four stone-cold certainties for All-Stars even as early as this
Eamon McGee just couldn't help himself with Armagh-melee tweet
"The economy was one of the big reasons" - Cadogan's move from an electrician to personal training
Kylian Mbappe reportedly wants PSG to sell Neymar
"He's actually smiling putting the ball over the bar. He should nearly be fainting." - Ryall on Limerick's legacy
Gavin Coombes one of four Irish players to push themselves into Test picture
Bundee Aki understandably emotional, as Ireland pay moving tribute to late Sean Wainui
You may also like
10 months ago
"They just can’t believe that Rob Kearney is there training" - Why the Rugby star's return to GAA is huge
10 months ago
"It's part and parcel, it’s a physical game" - Not everyone agrees with Kevin McStay's article about machismo in the GAA
10 months ago
"Have a bit of respect for your teammates" - Aaron Kernan questions the manner of Stephen Cluxton's absence
10 months ago
"What was Aidan O'Shea doing? He had a stinker" - Aaron Kernan reacts to O'Shea running onto the field during altercation
11 months ago
"All of those boys are conditioned to be top class inter-county players" - Mayo's fitness levels are crazy
11 months ago
"He's almost flawless" - Paudie Clifford's performances have drawn comparisons to a certain Kerry legend
Next Page