Zinedine Zidane's reign as Real Madrid was brief but incredibly successful, and his decision to walk away from the club sent shockwaves throughout the sport.

Zidane revealed at a press conference in the Spanish capital on Thursday afternoon that he had decided to quit as manager. Just five days previously, he had helped guide Madrid to their third Champions League title in three years. In just two and a half seasons as Real manager, Zidane won three European Cups and the Spanish title. He has chosen to walk away at the top and it's safe to say no one will ever match his feat of winning club football's top prize in three consecutive seasons.

Immediately following his announcement, Madrid players paid tribute to their former boss on social media, and their respect and admiration for the former world footballer of the year was evident. 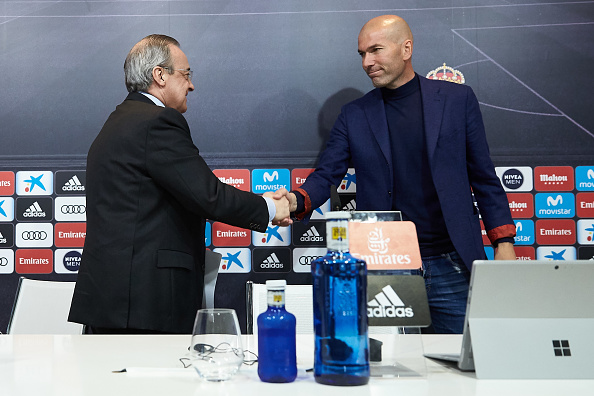 Details about how Zidane informed his players that he was quitting the club have since emerged.

According to Spanish publication Sport, Zidane told Madrid captain Sergio Ramos in person that he was going to resign as manager. He then broke the news to the rest of his squad with a WhatsApp message.

"Thanks for everything. Without your support in the hardest moments, none of what we have achieved would have been possible. We'll meet again soon, a hug."

END_OF_DOCUMENT_TOKEN_TO_BE_REPLACED

The report claims that Gareth Bale was the only Real player not to respond. The Welshman and Zidane are understood to have fallen out last season. Zidane wanted Bale to track opposition full-backs and help out in the defensive side of the game, but the forward felt he shouldn't have to and was subsequently dropped. The former Tottenham Hotspur star didn't post a message on social media about Zidane after Thursday's press conference.

The Frenchman's departure may mean Bale remains at the club, despite speculation linking him with a transfer to Manchester United.

popular
In defeat, Jerry Kelly dies with his boots on in coming of age final display
QUIZ: You have 30 seconds to answer this one tricky football question
The SportsJOE 12 o'clock quiz | Day 286
SportsJOE 2000s Football Quiz | Round 11
"Djokovic is a tool" - Tennis world turned upside down in day of days
You'll have to be a diehard fan to get 20/20 in this Liverpool players of the 90s quiz
"Newcastle fans have been served up dire tripe for about ten years"
You may also like
4 months ago
Sergio Reguilón would be a massive upgrade on Luke Shaw for Man United
4 months ago
"It's in the club's hands and they make things very difficult to be honest"
1 year ago
Move over Sergio Ramos, there's a new shithouse in town
1 year ago
Let's talk about Cristiano Ronaldo's ongoing decline
1 year ago
Postponing El Clasico shows two fingers to democracy
1 year ago
Real Madrid are La Liga leaders but remain deeply flawed
Next Page