He may be retired, but Ruud van Nistelrooy is as sharp as ever.

The Dutchman was one of the most prolific strikers of his generation, scoring 75 goals in 95 games for PSV, 150 in 219 for Manchester United, 64 in 96 appearances for Real Madrid and 35 in 70 games for the Netherlands.

He proved in this video that he's as quick witted as he was sharp in front of goal.

The 39 year old was at the Oxford Union recently, engaging in an hour long interview, and it didn't take long for Martin Keown to be mentioned.

The former Arsenal defender infamously goaded Van Nistelrooy after the United striker missed a last minute penalty against the Gunners in September 2003. 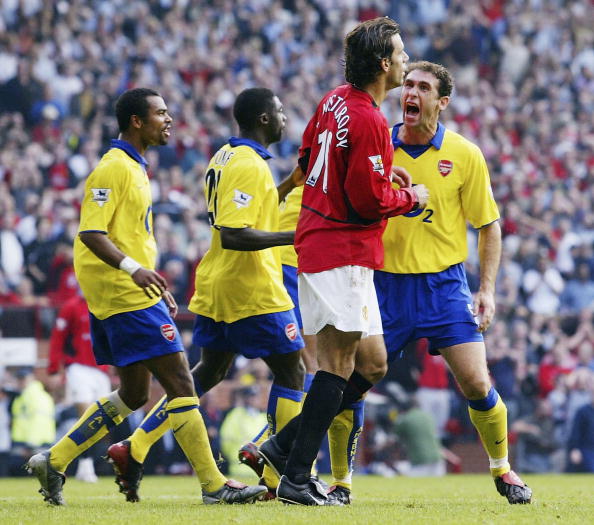 The Arsenal players accused Van Nistelrooy of diving to earn the penalty, and as a result of the melee following the missed penalty, a number of players from both sides received fines and suspensions from the Football Association.

When told that his old nemesis Keown, who landed something of an elbow on the United striker whilst celebrating his penalty miss, lives in Oxford, Van Nistelrooy couldn't pass up the chance to question the former England defender's intelligence.

popular
Eric Dier calls Dele Alli on his tantrum in All Or Nothing changing room row
Sean Kelly sums up emotion of a nation as Sam Bennett all but sews up the green jersey
"I've always said I'll go back and play. I'll 100% play with Portlaoise again, and I really want to play for Laois"
The SportsJOE 12 o'clock quiz | Day 181
The Tipp minors who beat Dublin's golden generation: the ones that got away
QUIZ: Can you name the 5 Man United players in 15 seconds?
Anthony Stokes has Livingston contract terminated after Astro Turf struggles
You may also like
2 days ago
Man United beaten to Sergio Reguilon
4 days ago
Sergio Reguilon edges closer to Man United move as talks intensify
1 week ago
'I only have myself to blame for this huge mistake' - Mason Greenwood
2 weeks ago
Sergio Reguilón would be a massive upgrade on Luke Shaw for Man United
2 weeks ago
How will Donny van de Beek fit into Manchester United's midfield?
2 weeks ago
Marcus Rashford puts UK government to shame with creation of poverty task force
Next Page