This fluffed chance is so comical that Seth Rogan should genuinely consider casting it in his next movie.

PSG striker Edinson Cavani had a golden opportunity to add to his tally for the season against Guingamp, but failed miserably at taking it on almost every level.

Clean through on goal and with just the keeper to beat, Cavani uncharacteristically miscued his shot into his hoop, fell over, then sliced the ball out for a goal kick while on his back. 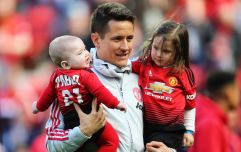 Ander Herrera rips European Super League apart, just like we all knew he would

END_OF_DOCUMENT_TOKEN_TO_BE_REPLACED

It was such an unbelievably poor miss that Marco Veratti actually looked befuddled as he chased after the bobbling ball from the Uruguayan's pathetic effort.

Ultimately, the miss meant little as PSG hockeyed Guingamp 3-0 to extend their lead atop the Ligue 1 table.


popular
Paul O'Donovan busts the cliches and leaves the mystery behind him in one more emphatic interview
Ireland's rowing heroes on what everyone was shouting as they beat Team GB to bronze
Aidan O'Shea on gym work, training over lockdown and the importance of younger players bulking up
Next time someone doesn't cut you slack for commuting to training, show them Joe Canning's words
Warren Gatland with great response after being asked if he'll set up Twitter account
BREAKING: Grainne Murphy issues heartfelt statement as she retires from international swimming
People are shocked after finding out how much an Olympic gold medal is actually worth
You may also like
3 months ago
Neymar continues red card fight down tunnel as PSG knocked off perch
10 months ago
Neymar posts full explanation of altercation with Marseille's Alvaro Gonzalez
10 months ago
Alvaro Gonzalez responds to Neymar's accusation of racism
10 months ago
Carnage in Le Classique as Neymar accuses Alvaro Gonzalez of racism
1 year ago
Football must learn from Saracens' punishment
2 years ago
Matthijs De Ligt off to Juventus and PSG are furious over contract clause
Next Page