VIDEO: Manuel Neuer talks about the importance of sweeping in goalkeeper masterclass

The sweeper 'keeper opening up on the secrets of the trade. The trade that only he stocks.

Manuel Neuer is one of the greatest goalkeepers of all time.

And, it's fair to say, he's probably one of the best sweepers ever considering you don't have to lose an outfielder to do it.

The Bayern Munich legend was giving the folk at adidas a little taster session of what it takes to make a machine like Neuer tick and, of course, he couldn't talk about the art he has mastered without discussing his ability to win the ball back. From defensive midfield.

He can walk into that Arsenal midfield "@NFVines: Manuel Neuer 😂😂 https://t.co/OSF6xTnQ9u"

"All areas are very important to train but you have to always be in contact with your defenders," the German World Cup winner said during the adidas Gamedayplus episode. "There's a space between them, don't get too far. You have to help them when they make a mistake."

The commanding number one shows a few training techniques for improving his stability and stretch behind shots and high balls but a lot of what he does is on instinct. Of course it bloody is. 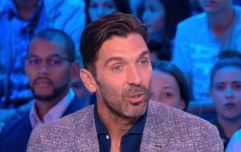 Gigi Buffon ranks his top three goalkeepers in the world

END_OF_DOCUMENT_TOKEN_TO_BE_REPLACED

Do you practice punching as well?

"Not so often. I like to catch the ball."

There are more gems in the video like Arjen Robben going through speed training and Thomas Muller being a general legend but skip to 7:07 (if it hasn't already) for the Neuer masterclass.


popular
The SportsJOE 12 o'clock quiz | Day 113
Jack Charlton's role in getting Roy Keane to Manchester United has been revealed
"Never back against the Irish" - How the BBC covered our USA 94 win over Italy
Roy Keane on the experience of being managed by Jack Charlton at USA 94
Can you name every English football league club that begins with 'S'?
QUIZ: Can you name the first professional teams of these footballers?
The SportsJOE 12 o'clock quiz | Jack Charlton special (Day 112)
You may also like
1 year ago
Toni Kroos responds strongly to Mesut Ozil claims of racism in German camp
3 years ago
Manuel Neuer sticks the boot into Arsenal with brief Facebook post
3 years ago
Robert Lewandowski best watch his back as Manuel Neuer can strike a feckin' football
3 years ago
Here are the 10 best goalkeepers on FIFA 17
3 years ago
WATCH: Manuel Neuer's reign as new German captain began with a perfectly executed Cruyff turn
4 years ago
Alex Ferguson reveals why he signed David de Gea instead of Manuel Neuer
Next Page