Parrott needs out of Spurs: he's worth more than this

Anyone who has embarked on a lengthy job search at the beginning of their career knows the struggle of getting that first break. “Marketing Assistant, perfect for someone just out of college. Must have relevant college degree and 4 years experience”. Can’t get a job without experience; can’t get experience without a job. This chicken and egg scenario is now manifesting itself for Irish youngster Troy Parrott under new Spurs boss Jose Mourinho. The Portuguese manager has reverted, as everyone knew he would, to his old self. Parrott needs game time, and he needs to leave Spurs to get it.

Irish fans were worried as soon as Mourinho took over the reins from Mauricio Pochettino at the end of November. Notorious for not fostering young talent, and for letting some of the Premier League’s leading lights such as Mo Salah and Kevin de Bruyne out of his clutches as Chelsea boss, it seemed like only bad news for Parrott’s fledgling career in North London.

The moment of the weekend 👏

And then the Irish striker doing a Gaelic football solo with it 😍pic.twitter.com/2bYSnf5omu

But, this was, once again, a “new” Mourinho. He laughed with press. He was respectful to his predecessor and his opponents. He had a notable moment with a ballboy in Spurs’ home win over Olympiakos in the Champions League, ensuring the aftermath was shared far and wide as the young man was invited to have a meal with the team that weekend. He not only gave Troy Parrott his debut, he ensured the young Dubliner got the match ball afterwards and singled him out for praise in his post-match comments.

As Spurs have struggled in recent weeks, however, we have begun to see the old Mourinho. We have seen the deflection away from his team’s poor performances by playing the pantomime villain in the press: losing to Southampton and then labelling the Southampton goalkeeping coach “an idiot”. We have seen him blaming players for their injuries; slamming Tanguy Ndombele for being “always injured… He’s injured, he plays one match, next week he is injured.”. And, with the loss of Harry Kane in recent weeks, we have once again seen his refusal to give youth a chance. 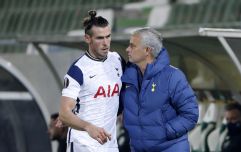 END_OF_DOCUMENT_TOKEN_TO_BE_REPLACED

You can view his comments above on what they really were; a public appeal to Daniel Levy for funds if Spurs are to challenge in any competition this season. But was there any consideration given to the young striker in his ranks? The 17 year-old who, only 6 weeks ago, Mourinho had his arm around after his first ever Premier League appearance? How could Parrott have felt knowing that, even in an FA Cup replay at home against Championship side Middlesbrough last night, he didn’t even merit a token place on the bench?

Mol an óige agust tiofcfaidh sí. Praise the young and they will flourish.

Norwich gave Adam Idah his chance against Preston in the Third Round of the FA Cup two weeks ago. The young Irishman responded with a hat-trick. Last weekend, coming up against Manchester United at Old Trafford and with their star striker Teemu Pukki out of action, once again he was given his chance to prove his mettle. Adam Idah is just a year older than compatriot Troy Parrott.

Mason Greenwood has been one of the few good news stories coming out of Solskjaer’s United this season. An exciting attacker, product of the youth academy and very much in the mould of whatever it is this “United Way’ we keep hearing in place of concrete plans from the United boss. Greenwood has made 30 appearances in all tournaments this season, clocking up 11 goals and 1 assist in a United team not exactly shooting the lights out up front. Mason Greenwood is just 4 months older than Troy Parrott.

Jose Mourinho has form for using players to prove a point. He played Scott McTominay in midfield over problem-child Paul Pogba at Manchester United, lauding the Scotsman’s performances to such an extent that an alien watching football for the first time would stake their life-savings on McTominay winning the next 10 Ballon d’Ors. He dropped Iker Casillas for Antonio Adan at Real Madrid in 2012, flexing his muscles in a Madrid dressing room he was beginning to lose. Not content with that, he then brought in Diego Lopez in January of 2013 when Casillas got injured, and kept the club legend on the bench for the majority of that final season, even when he returned from injury. When defender Pepe spoke out in Casillas’ favour, he too was dropped. Troy Parrott’s only use for Mourinho at the moment is so Jose can gesture in his direction while roaring at Daniel Levy that he simply cannot work under these conditions. Parrott is nothing more than another pawn in Mourinho’s games, and he is worth a lot more than that.

The point is not that dropping Troy Parrott into the Spurs starting eleven would guarantee goals. The point is not that Irish fans are genuinely so blinkered that they believe he is ready to lead the line for a top Premier League and Champions League club. The point is that, as it stands, there is nothing Parrott can do to get given a chance. Jose Mourinho is nothing more than a man who is handed a jigsaw, opens it and is disappointed that it doesn’t already look like the picture on the box.