Who said Shakespeare was pointless?

Jose Mourinho is box office, he is headline-grabbing, he is the Special One. Maybe, at one stage, his appointment at Tottenham Hotspur would have made sense. But it feels as if we all know now how this will play out before it even begins. It feels as if, regardless of good intentions or grand schemes, Jose Mourinho will leave in acrimonious circumstances in his third year, if not earlier. No matter how many plotlines he attempts to write, the pitfalls and the structure and, most importantly, the ending, will always be the same. He is the greatest tragic hero ever written, in the only Shakespearean tragedy to provide sequels.

We’ve all struggled through a Shakespearean tragedy in school. You’ve probably named your own Leaving Cert play in your head already. King Lear, Othello, Hamlet, Romeo and Juliet, Macbeth or Julius Caesar, whichever was your personal poison. We’ve all trawled through barely understandable English and learned quotes and rehashed essays just to do the one thing the majority of characters don’t do: survive.

It’s a strange thing for the genre itself to exist. Everything is pre-destined: the central man will fail in a burning world of chaos. The tragedy unfolds with the reader knowing exactly what’s going to happen, even if they manage to suspend that belief for its duration. It’s like flipping a modern day rom-com on its head. You know your main character will die, taking many others with them. You know there will be betrayal, heartbreak, violence. Devastation and destruction. That when it finishes, you’ll be glad to get back to the real world, where this hyperbolic microcosm of people’s most appalling traits can be cast to one side and classified once again as fiction. But you read it anyway, mainly because you have to.

Spurs are not doing the Leaving Cert. Spurs do not have provide the next Act in Mourinho’s personal tragedy. Spurs didn’t have to appoint him, but they did.

Shakespearean tragedies all contain similar stages at comparable points in the plot. So too do any of Mourinho’s previous appointments. There is a period of exposition, where characters are introduced, the stage is set, rivalries and romances emerge and the world is settled, still. Happiness is given, before being devastatingly snatched away; watch Mourinho bring his Spurs side to Old Trafford and then welcome Chelsea to their home ground in the next month. There is an inciting force, a moment or flashpoint that gives way to the rising action of the tragedy; watch Mourinho make an example of the first player to step out of line. There comes crisis and tragic force, as the world crumbles around our tragic hero; take your pick from the number of possibilities Mourinho will have to isolate players, fans and the board. These things are inevitable. These things will happen.

The root of a Shakespearean tragedy lies in the flaws of the central character, their hamartia. There are things wrong with this character that, combined with the world around them, lead to their inevitable destruction. Hamlet procrastinated in a manner most Leaving Cert students would be proud of, Romeo was hot-headed in both love and hate, Othello was too trusting in the wrong people. Take your pick for the man himself. Jose Mourinho plays a brand of football that would bore an audience even more than Brendan O’Carroll playing a one-man version of Macbeth. He is a toxic presence in any dressing room. He will isolate all the most important people. He is flawed, and this story is already written. 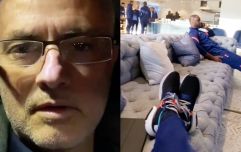 END_OF_DOCUMENT_TOKEN_TO_BE_REPLACED

Then the ending. An inevitable blood bath, multiple casualties and a dramatic finish to the central character. They are beaten, wearied by the world around them and they ultimately fail in what they set out to achieve, or pay a heavy price in doing it. Hamlet avenges his father, but kills the majority of Denmark in the process. Romeo doesn’t get his girl, but murders her cousin and watches his best friend die. Jose Mourinho wins a cup competition but plays Scott McTominay over Paul Pogba to prove a point. By that stage everyone is just willing for the end. For the release. For the glimpse of restored order that comes in every Shakespearean tragedy.

Because they will end with a glimmer of hope. A belief that better will come, because it has to. The remaining characters, the survivors, are left in the rubble of what was once their home, trying to make sense of what has just happened. The Capulets and the Montagues make nice after the death of their only children, Edgar and Albany promise to rule Britain after the entire royal line is wiped out and Macduff restores the rightful King to the throne after he slays the evil tyrant.

So too will Daniel Levy, in two and a half years’ time, look around at the skeletal cast remaining around him and know that things can only improve. That from the inevitable smouldering ruins of the club he has so carefully crafted, the only way is up.

We all know what is going to happen, but you kind of have to watch it.


popular
Dustin Poirier annihilates Conor McGregor to earn stunning UFC 257 victory
Jolie Poirier certainly let her voice be heard after her husband's win over McGregor
McGregor's first words to Poirier after defeat show where the damage was done
Khabib Nurmagomedov reacts to Conor McGregor's shock UFC 257 loss
Pics: People are accusing Conor McGregor of stealing his image from a Canadian model
Roy Keane's first impression of Cristiano Ronaldo proved to be very accurate
John Kavanagh has not spoken with Conor McGregor since night after Khabib loss
You may also like
3 months ago
Absolute chaos as Spurs hit with 96th minute penalty for no-look handball
3 months ago
Jose Mourinho hits back at Ole Gunnar Solskjaer after goalpost joke
4 months ago
Tottenham open talks for Inter's Milan Skriniar
4 months ago
PSG begin talks to sign Dele Alli from Tottenham Hotspur
4 months ago
Eric Dier calls Dele Alli on his tantrum in All Or Nothing changing room row
4 months ago
Jose Mourinho's full 'be a c***' team-talk contained a handy nugget of information
Next Page