Time to end the Jeff Hendrick No.10 experiment

A good soldier, but not the answer for Ireland.

Before we get into it, a couple of points about Jeff Hendrick. He started three Ireland games in seven days and one of them went to extra time. He has started the Premier League season well with Newcastle United.

Now... how much more proof do we need that Jeff Hendrick is not the answer to Ireland's No.10 dilemma?

END_OF_DOCUMENT_TOKEN_TO_BE_REPLACED

Jeff Hendrick has now played 58 games for his country and we still reckon he can be the player to demand the ball, high up the pitch. The guy to drive at opposition defences. The guy to confidently link our midfield and our attackers. The guy to unlock defences with a pass or flick on. The guy to hold up the ball until the cavalry arrives. The guy to make a late dart into the box to get on the end of a chance.

Does any of that sound like the Jeff Hendrick we have been watching for Ireland for the past four years? Slim chance. In the fleeting wisps of a moment, perhaps. The exception, not the norm.

Jeff Hendrick, or at least the Jeff Hendrick that we have seen since Euro 2016, is a tidy centre midfielder who is good at keeping possession and mopping up around the centre of the park. For four seasons, he was fair to middling for club (Burnley) and country.

The likes of Sean Dyche, Martin O'Neill, Roy Keane and Mick McCarthy have all spoken about Hendrick as a player capable of taking on the responsibility of being a No.10. They wanted him to be more of a goal threat.

From watching Hendrick play, since 2016, he is clearly more comfortable as the prompter and prodder. He is not our No.10 and he must know that too. 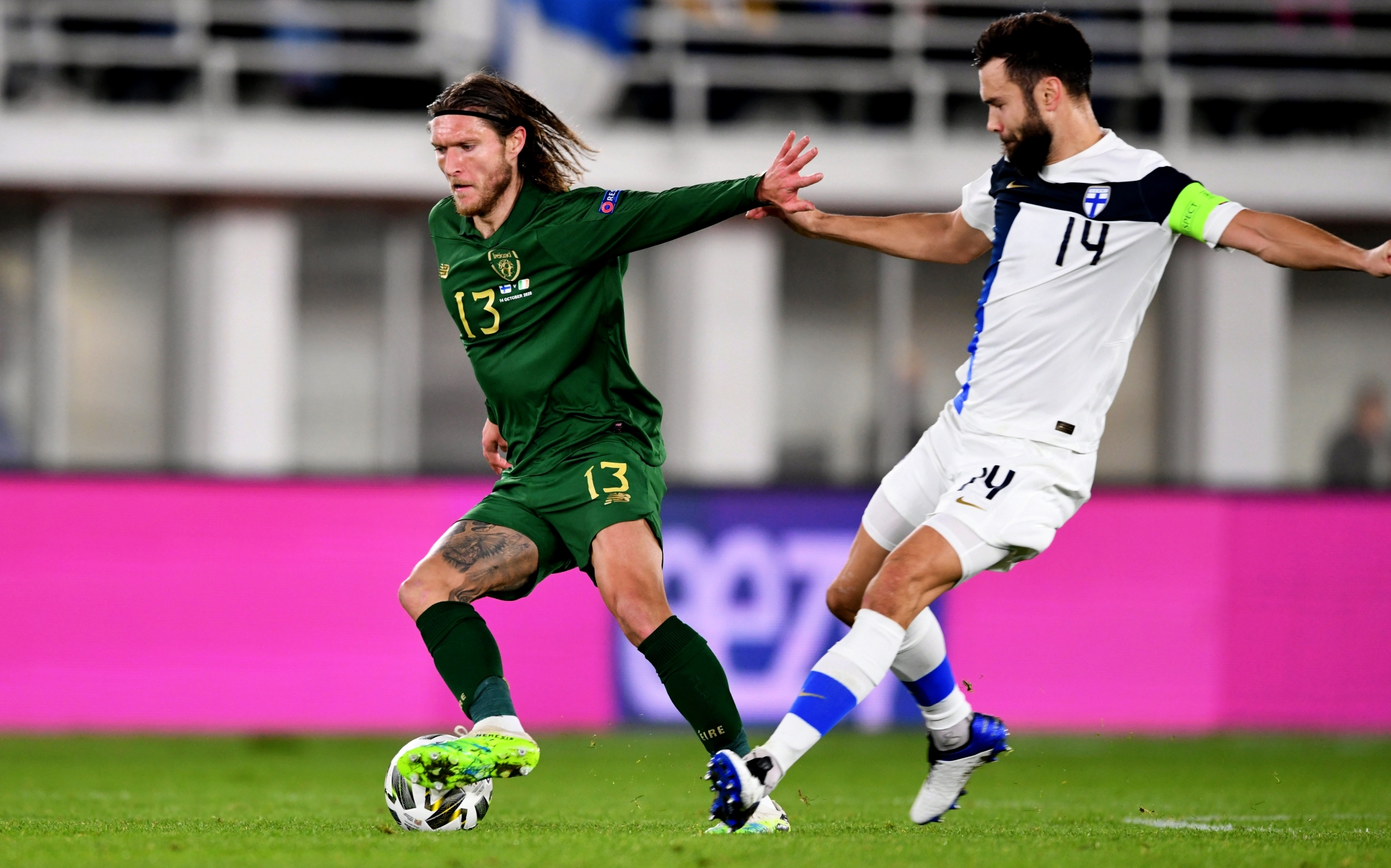 Jeff Hendrick in action against Tim Sparv of Finland during the UEFA Nations League match at Helsingin Olympiastadion in Helsinki. (Photo by Jussi Eskola/Sportsfile)

END_OF_DOCUMENT_TOKEN_TO_BE_REPLACED

In his past five seasons, Hendrick has scored 12 goals and made nine assists. He has scored one international goal since 2016 and it was in the abhorrent 1-0 soul-tester against Gibraltar. That is the return of a sitting centre midfielder, not the guy who is the driving force for his team's attack.

Ireland have not replaced Wes Hoolahan [when they played him] since he stepped away from international in 2017. Hendrick, as a consistent Premier League performer, has been tasked with filling that hole but there are three other options available.

Stephen Kenny [and McCarthy before him] has tasked Hendrick with being that No.10, but the way he's going, even Conor Hourihane or Robbie Brady would be better choices. Neither player is the complete answer but they would be better suited than Hendrick.

Against Finland, Hendrick did not show he was aware of the requirements of the role. He rarely showed for the ball in advanced positions and often ploughed forward, out of passing range, when his full-backs darted forward. Too often, he drifted back into the Irish half and he was careless in position in the second half. His best 10 minutes were right before Kenny withdrew him for Adam Idah.

Brady and Hourihane, as they have shown in the past, are hungry for possession. They call the ball on themselves and they want to be the problem-solvers. See Hourihane making the brave passes he did against Slovakia or Brady running at the Welsh defence before curling a shot just wide.

END_OF_DOCUMENT_TOKEN_TO_BE_REPLACED

David McGoldrick would even be better suited to the No.10 role. He is not a prolific striker but has shown, time and again, how he can take hold of the ball just inside the opposition half and instigate attacks. McGoldrick behind a Long, Idah or Parrott would be a prospect that would put it up to opposition defences and make them uncomfortable.

And then we have Jack Byrne. Again, we are not calling him a world-beater but you have to feel he would have created a few chances for the Irish attackers and been brave enough to try one-twos and take on shots from distance.

Instead, against Finland, we had Hourihane and Molumby both tidy but none too threatening. And then we had Hendrick, a man lost in what he has been told to do and what he wants to do.

Hendrick is a good soldier. He is doing what he has been asked but, in reality, it is helping no-one.

It is time to end the Hendrick No.10 experiment and come up with a better plan in 2021.


popular
WATCH: Paul O'Connell proves for the umpteenth time that he's not like us mere mortals
Kieran Donaghy set to break 30-year-old club record this weekend
"He's one of the best athletes, if not THE best athlete I've seen in the last while"
Study shows GAA players more prone to binge drinking than their peers
Sean O'Brien shares some of the worst player forfeits from his Leinster days
Shane Walsh: 'That's not how I was coached to play football. No one was coached to play football that way'
Danny Mills forgets he's on air as he calls Man Utd 's***' on Sky Sports
You may also like
1 week ago
Simon Zebo returns as Ireland announce squad for November internationals
1 week ago
Jordan Larmour primed for a season to remind everyone how good he is
1 week ago
Seven exciting Ireland prospects pushing for November squad inclusion
1 week ago
"Where Johnny Sexton is so important to us now is being able to pass the baton"
1 week ago
"I'd love to finish on home soil but I can't see it. I won't be playing in the next Six Nations"
1 week ago
Ireland star Will Connors on his rude awakening playing GAA in KIldare
Next Page