Richard Keogh has stepped somewhat into the void that has never been fully filled since Richard Dunne retired. The Derby defender was excellent for the Republic of Ireland in the crucial games against Germany and Bosnia.

The centre-half put in three fantastic displays against the world champions, and in the two play-off games against Bosnia. 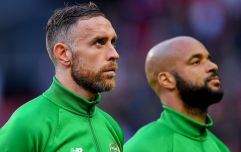 END_OF_DOCUMENT_TOKEN_TO_BE_REPLACED

Keogh's marshalling of Edin Dzeko at the Aviva Stadium was reminiscent of Dunne at his best.

And Keogh tonight scored an own-goal in Derby's game away to Burnley, and breaking an unfortunate record in the process.

4 - No Championship player has scored more own goals since August 2011 than Richard Keogh. Clumsy. 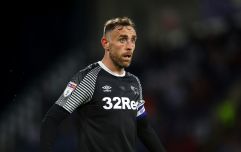 END_OF_DOCUMENT_TOKEN_TO_BE_REPLACED

He's now scored more own goals in the Championship since August 2011 than any other player.

Keogh's evening didn't get any better, as he gave away a penalty to hand Burnley a 2-1 lead.

Although its a bad night for the Ireland defender, it's good to see he's keeping his best form for the Euros.


popular
World Cup 2022 Day 18: All the major action and talking points
Gary Neville sticks up for Ronaldo as contextless pictures and videos taken as gospel
Brazil star responds after Roy Keane slates dancing celebrations
Cristiano Ronaldo's sister blasts Portugal boss' decision to start forward on the bench
Eniola Aluko responds to criticism after on-air mistake on ITV
Ballyhale's Colin Fennelly felt Ballygunner's victory speech was disrespectful
"There's no soccer, hurling, or rugby" - Kilcoo's secret to success
You may also like
3 years ago
Derby condemn 'small group of players' for night out that ended Richard Keogh's season
3 years ago
Paul McGrath full of praise for that man Richard Keogh
3 years ago
Frank Lampard made beeline for Richard Keogh after Derby's dramatic victory over Leeds
3 years ago
Richard Keogh reacts to being named Derby Players' Player of the Season
3 years ago
Shane Long pulls out of Ireland squad with injury ahead of opening Euro 2020 qualifiers
4 years ago
Richard Keogh gets last laugh on Pogba after Twitter exchange
Next Page