UEFA have been keeping Russian and Ukrainian teams apart so far this season, due to the conflict in eastern Ukraine.

However, with Dynamo Kiev, Dnipro and Zenit St Petersburg all in quarter-final second leg action tonight, the BBC say the governing body may need to step in should all three progress.

If that does happen, Dynamo Kiev will play Dnipro in the last four, while Zenit will face the winners of Napoli's tie against Wolfsburg, with the Italians leading 4-1 on aggregate. 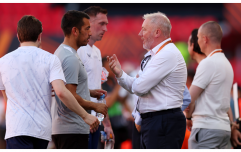 END_OF_DOCUMENT_TOKEN_TO_BE_REPLACED

As it stands, Zenit trail reigning champions Sevilla 2-1 after their first leg, but the Russians do bring an away goal into this evening's return fixture.

Dnipro are home to Club Brugge in their second leg with the tie scoreless, while Dynamo Kiev travel to Florence to take on Fiorentina level at 1-1.

Dnipro at just short of evens to qualify for the last four, Zenit are 13/8, while Dynamo Kiev have the longest odds, at around 11/5.

However, should a Ukranian and Russian side meet in the final, it will go ahead as planned, with the National Stadium in Warsaw hosting the final on May 27.


popular
Get him a tuxedo, give him the All-Star and for crying out loud, someone bring that man out to America
Southampton pay tribute as Shane Long leaves the club after eight years
Fans react to Tottenham Hotspur's 'brilliant tease' for Richarlison signing
Tiernan Kelly and three other players hit with ban following tunnel brawl
Mohamed Salah signs new long-term contract with Liverpool
Former England Under-21 captain open to playing for Ireland
The four stone-cold certainties for All-Stars even as early as this
You may also like
2 months ago
Ally McCoist gives his verdict ahead of Rangers semi-final against Leipzig
2 months ago
Joe Cole labels David Moyes 'the Moyes-iah' following West Ham's victory in Lyon
2 months ago
Pitch invader stops West Ham attack during Europa League clash vs Lyon
3 months ago
Joe Cole is 'lost for words' following Andriy Yarmolenko's 'Hollywood' goal
3 months ago
Quiz: Name the teams who have knocked Man United out of Europe since 1993/94
9 months ago
Rangers man Glen Kamara ‘booed with every touch’ by kids under 14 during Sparta Prague tie
Next Page