"But some people would say..."

Some people would say anything, Darragh. It doesn't mean you have to give them a voice on prime time TV and aggressively labour their pointless points.

There's playing devil's advocate and then there's that unique RTÉ obsession with what they call balance - which isn't really balance at all, just a fetish for ensuring that every Tom, Dick and Harry's first incomplete thought is represented on a national platform. 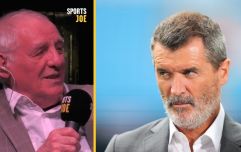 END_OF_DOCUMENT_TOKEN_TO_BE_REPLACED

Darragh Maloney posed a question of the panel about the Kenny era after Ireland's 0-0 draw with Slovakia ended in penalty defeat and that's okay. Then he pushed again and again to the point that it didn't seem like he was offering an alternative view, more yearning for the good old days when everything really was terrible and we could legitimately complain about all of it.

He's not the face of this culture war that weirdly has some disgruntled heads waiting in hope that Stephen Kenny can be declared a failure after three games. Maloney was just a naive vehicle for it on Thursday night.

His biggest crime? Giving them more oxygen than they've earned. Kenny's crime? Having the audacity to suggest that Irish people should expect more of their international team.

Imagine that for a second. There's a group of idiots lying around this country hoping Stephen Kenny fails miserably in the Ireland job because he said Ireland could play better football and get better results. 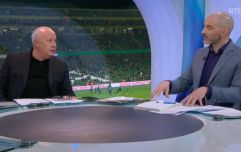 END_OF_DOCUMENT_TOKEN_TO_BE_REPLACED

Each of their arguments can be thrown out in record quick time.

Where's all this fancy football we were promised?

If you think for one second a Mick McCarthy or a Martin O'Neill team would've created that amount of chances and dominated the game so much against Slovakia away from home - the way Stephen Kenny's team did - then we've got nothing else to talk about. Ireland are playing front-foot football and they did everything but score in this playoff.

That's after three games. Not even two full camps for the new manager. 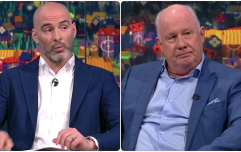 END_OF_DOCUMENT_TOKEN_TO_BE_REPLACED

Mick McCarthy will be the most disappointed watching his team go out like that.

Mick McCarthy didn't qualify for the playoffs. Mick McCarthy won three games - two against Gibraltar, one against Georgia - and failed in the group stages. Martin O'Neill got Ireland to the playoffs when he guided them to bottom place in the Nations League after scoring one goal in four games.

But, yes, maybe McCarthy - and O'Neill too - would be disappointed to watch their team go out like that. With a fight. With style. With a complete contrast to what they've spent years insisting they couldn't do.

This style of football leaves us exposed at the back.

We kept a clean sheet.

A good counter-attacking side would've destroyed us last night.

But we were playing Slovakia last night. And we set up in a way that dismantled them. And we kept a clean sheet.

So Stephen Kenny has done that thing which everyone seems to think only great minds like McCarthy and O'Neill can achieve, he kept it tight at the back. This time though, the whole game plan wasn't designed so the team could keep it tight at the back and then hope a set piece broke in our favour. This time, it was a clean sheet coupled with utter domination that should've resulted in a comfortable win.

And these glory days that seemed to be hinted at - or what some people would pine for - weren't glorious by any stretch.

In fact, this is important to stress for anyone who considers that Stephen Kenny is moving the country away from a tried and trusted method, here is the football heritage of the Republic of Ireland over the last decade and a half.

2020
Mick McCarthy did not qualify.

Kenny got a one-off shot because John Delaney, in all his wisdom, decided that it was better to have him wait in the wings and watch how it was done by Mick McCarthy. McCarthy's team went on to score seven goals in eight games, in a group that involved two matches against Gibraltar. And, most importantly, they did not qualify.

Thankfully, Richie Sadlier, like he often is, was at hand in the RTÉ studio to be the very necessary voice of reason.

There's a time and a place for Dunphy and co to grumble after matches. This wasn't it. If Maloney couldn't see what was in front of him, both in Kenny's side's performance and in the campaign of Mick McCarthy, then no-one could've painted a clearer picture for him than Richie Sadlier.

"We played with the purpose and tempo tonight that we usually have to wait until we're a goal down to play," Sadlier said.

"We react to scenarios that go badly and then we produce those kind of performances.

"Tonight from the very start, we tried to impose our game on Slovakia. You can't do it for a whole two hours. We had spells where it was a little bit sloppy.

"But there were large spells there where you could see all the things that Stephen has been saying in interviews for the last two years playing out in front of us.

"We were patient with the ball, we had options when we had it. We were keeping it. Moving it from left to right."

And, beautifully, Sadlier nailed the most crucial distinction between Stephen Kenny's team and what we've grown used to.

"We looked like a threat to the opposition goalkeeper - one of the areas where we've been the weakest for the last two or three years."

Ireland were the better team but didn't take their chances and paid the price for that in the penalty shootout say the #RTEsoccer panel. #SVKIRL #Euro2020 pic.twitter.com/BVpkf1eGlH

"Exactly," Maloney said when Sadlier conceded that we didn't win. Intent on finding the darkness in this Kenny era already, he was batted down. Again, only in a fashion that Sadlier could've done.

"Any stand-out memories whatsoever from the campaign under Mick? Bar the tennis balls?

"Can you think of anything? It was utterly forgettable.

"We're here tonight because of the Nations League, where we finished bottom and didn't win a game.

"So the campaign has ended tonight, in dramatic style, in disappointing style, but it's ended on a high. It's the best we've seen from an Irish team in a good while."

Another pundit would've been rail-roaded or pressured into compromising their real thoughts with some sort of unproven nonsense that says McCarthy's team was doing better. If Sadlier wasn't there to produce another near-perfect piece of analysis, we'd have more losers running around the island today pining for the days when we were able to grind out a good old-fashioned 1-0 win. Against Gibraltar.