Few would have seen this coming.

Not many of us would have foreseen a Keane Rashford feud exploding to life after Manchester United's wretched home defeat to Arsenal.

Roy Keane was more resigned and frustrated than the fire and brimstone reactions he has given about his former club, at times, in the past 18 months.

The former Manchester United captain is far from impressed with the current crop at the club, under Ole Gunnar Solskjaer, and went off on another tirade after they lost 1-0 to Arsenal at Old Trafford.

"Ole will lose his job working with these players," Keane declared after the game. "As sure as night follows day, that is going to happen. I've been saying that for a month or two now."

Players such as Fred, Bruno Fernandes and Paul Pogba, who conceded a penalty that gifted Arsenal victory, all had poor performances. In his post-match analysis, Keane criticised the entire squad but focused on Marcus Rashford for his body language out there. He said:

"I'm just not convinced with these players. I go back to it and we often talk about characters at Manchester United, I just don't see enough of them today.

"I looked at Rashford closely today. I know he's had a load of plaudits over the last few months and I know he's still a young man, but his body language today was shocking, really shocking. Shrugging his shoulders when things weren't going his way.

"You roll your sleeves up at Man United when things aren't going your way, and that's where you look at your leaders and your characters. And I was going to say I don't see enough of them... I don't see any leaders out there. Right through the whole team, the experienced players... a real, real worry for United.

"The last year, year and a half, you said, 'We'll give them the benefit of doubt, the recruitment, blsh, blah, blah, what's going on upstairs, where there's problems, but what I saw today... you go back to the home games, Palace, Brighton away, Spurs at home and even Chelsea, there's a real lack of quality for United and a long, long way to go for this club."

🗣"Where do I start? We keep saying have they turned a corner, it must be the longest corner ever"

Roy Keane is not happy with Manchester United at full-time pic.twitter.com/ENhiT6XU7U 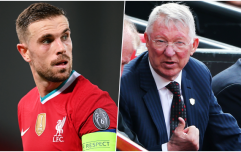 END_OF_DOCUMENT_TOKEN_TO_BE_REPLACED

There was more to come as Keane accused Edinson Cavani of not bothering during the pre-match warm-ups before he turned on fellow pundit Tim Cahill, who had the audacity to praise Mikel Arteta.

As Keane took shots at Arsenal's poor form, Cahill threw up his arms, "Whatever you say, Roy."

"They should get Arteta in," Keane later jibed, "as he's the new Messiah!"


popular
The SportsJOE 12 o'clock quiz | Day 286
Wayne Rooney story about Memphis Depay shows why he failed at Manchester United
Alex Ferguson's dismissive comments confirm truth about Jordan Henderson
"There were some tough battles but I was happy to test myself against the best"
QUIZ: Name the clubs to have lost in every Champions League final
"The divil you know is better than the divil you don't" - Larkin stands by Cody
QUIZ: Can you name the Scottish football cult heroes?
You may also like
3 days ago
Paul Pogba's reward for Burnley bullet by may be seat on Anfield bench
3 days ago
QUIZ: Name the Man United XI from the last time they led after 17 games
3 days ago
Gary Neville apologises for his commentary during Burnley vs Man United
4 days ago
Harry Maguire furious as Robbie Brady avoids punishment for Cavani challenge
4 days ago
Arsene Wenger claims he 'did not see' Pizzagate, blames Man United
1 week ago
Four senior Man United players should be heading off before January ends
Next Page