Roy Keane had plenty to say about Manchester United's insipid performance in their home defeat to Arsenal.

United are in 15th in the Premier League after their latest defeat and it is hard to argue that they deserve to be any higher. Arsenal were vastly better, in all departments, and were good value for their victory.

END_OF_DOCUMENT_TOKEN_TO_BE_REPLACED

Paul Pogba was not the only United player to put in an under-par performance but his sloppy concession of a penalty, which cost his side the game, drew criticism from many. Surprisingly, though, Keane singled out Marcus Rashford for his most stinging criticism.

United were played off the park in the opening half and Arsenal could have scored on three or four occasions as Thomas Partey pulled the strings in midfield. The only effort on goal United managed was a low Mason Greenwood drive that was saved by Bernd Leno.

At the break, Keane hailed Arsenal's opening 45-minute display as "outstanding" while questioning United's lack of intensity and purpose.

The home side looked brighter in the second half but they created no clear-cut efforts. Arsenal went close, again, through Pierre-Emerick Aubameyang but his curling effort went just wide.

On 67 minutes, moments after Gary Neville, on Sky Sports commentary duty, suggested a mistake could decide the game, Pogba slid in behind Hector Bellerin and clipped his ankle to concede a penalty.

It's a nightmare for Paul Pogba and #MUFC! 👻

The midfielder brings down Hector Bellerin in the box and Mike Dean points to the spot!

END_OF_DOCUMENT_TOKEN_TO_BE_REPLACED

As it was, Aubameyang stood up and slotted home the spot-kick. Ole Gunnar Solskjaer responded by bringing on Donny van de Beek and Edinson Cavani for Bruno Fernandes and Greenwood.

Van de Beek's smashed ball into the box deflected off the face of Leno and struck the post, but that was as good as it got for United. They have now collected only eight points from six league outings. Following the game, an irate Keane teed off:

"People were thinking United turned a corner after their last few performances, I was never kidded on by that... United, you start the game like they did with no energy and enthusiasm, you'll make it a very long day for yourself."

"Where do you want me to start," he added, "we spoke before the game about being on the front-foot, being aggressive and showing quality... but where was it? Where was the quality?"

Keane was not impressed with Marcus Rashford was claimed his body language was "shocking". "We talk about lack of leaders," he continued, "I didn't see any leaders out there." 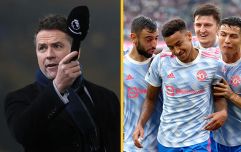 END_OF_DOCUMENT_TOKEN_TO_BE_REPLACED

Roy Keane did not see enough character from Manchester United against Arsenal pic.twitter.com/Suh9RC11y7

"They say they're turning the corner," Keane later remarked. "It must be the longest corner ever."


popular
Rob Kearney taught a classic GAA lesson when he tried to have the craic in second game back
The scenes in Newbridge as the biggest hit and hope ever knocks Moorefield out
Shane Lowry had no problem setting reporters straight at Ryder Cup briefing
Rob Kearney on defying union "bigwig" that told him he'd never play GAA again
'Solskjaer has started the new season the same, so why would you expect a different result?"
When Liam Brady lit into Brian Clough for his dismissive Mick McCarthy comments
How one text message a teammate sent Kieran McGeary proves that Tyrone's success was a team effort