"Roy Keane was my dream player to play against... he wasn't a clever player" - David Hillier

"He owes me a pair of Gucci loafers, if he's listening!"

Roy Keane is often recalled as an enforcer and a pitbull - this snarling figure that motivated by a mix of intimidation and his incredible force of will - but he was a much more rounded, skilful and courageous player than just that.

In his early years with Nottingham Forest and Manchester United, Keane was more of a box-to-box player and he got on the end of a lot of scoring chances. As well as doing his distribution and defensive duties, he averaged 11 goals a season with Forest. That dropped to six a season for the first part of his United career, but he did bag 12 goals the season after leading the club to a famous Treble success.

END_OF_DOCUMENT_TOKEN_TO_BE_REPLACED

Keane made a huge impact during his three seasons at Forest and he is still fondly regarded there. One Scott Gemmill quote about his former teammate, and his manager Brian Clough, sums up how key a player the young Corkman became at The City Ground. Gemmill once told The Telegraph:

"At the end of the game, Clough would normally be on his knees, offering to untie Keane’s boots for him, because he idolised Keane."

One player that was not in awe of Keane was former Arsenal and Portsmouth midfielder David Hillier. The midfielder, who played over 140 times for the Gunners, claims he always had an easy ride when playing against Forest teams with Keane in their midfield. 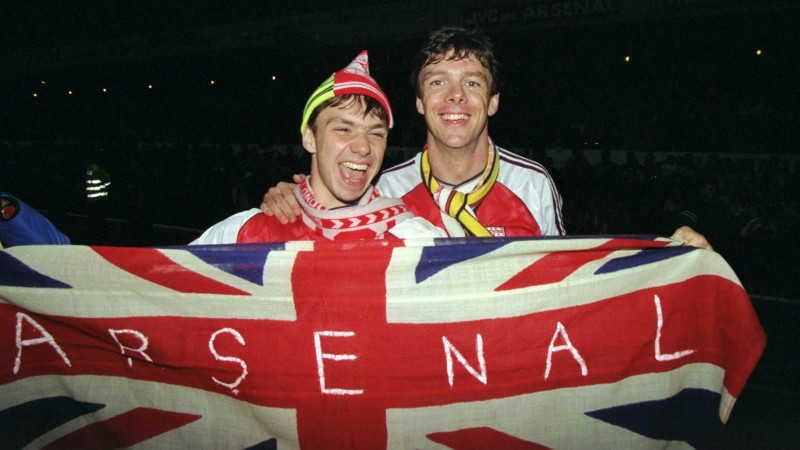 David Hillier (left) and David O'Leary (right) of Arsenal celebrate after their victory in the Barclays Division One match against Manchester United, at Highbury Stadium in 1991. Arsenal won the match 3-1 to win the championship. (Credit: David Cannon/Allsport)

END_OF_DOCUMENT_TOKEN_TO_BE_REPLACED

David Hillier made a recent appearance on the Under The Cosh podcast, the former Arsenal midfielder was asked what teams, and players, he always revelled facing off with.

"I had a few [stand-out] games," he began. "I had a game against Roy Keane at Forest.

"We played them in the cup. F***ing hell, I camped all over him, mate. He was my dream player to play against because he, Carlton Palmer, perfect for me.

"Used to rangey, long, simple runs, not clever players, easy to pick off. Roy Keane weren't a clever player when he made runs. He was just direct third man run, that’s all it was.

"It was standard training. Into the front, back into the midfield, the other midfielder goes - just track his run. I had the ability to get the ball off them and I could play a pass so I could just come out of it, just play a pass off."

END_OF_DOCUMENT_TOKEN_TO_BE_REPLACED

In league encounters, during Keane's three seasons at Nottingham Forest, Arsenal beat Clough's side twice, drew three times and lost once. Keane scored in two of those drawn games, at a Highbury ground that he is on the record as saying was his favourite away venue to play at.

Arsenal eliminated Forest in both the League Cup and FA Cup, in 1992/93, and the game Hillier was referring to was a 2-0 win in the FA Cup, at Highbury. Ian Wright scored both Arsenal goals in that game, and the Gunners would go on to win that competition, as part of a cup double.

Asked if he had a comparable engine to the former United and Ireland captain, Hillier declared, "Oh I was easily as fit as Roy Keane, easily. I was fitter than Roy Keane.

"In fact, I was so fit that when he got stuck at a nightclub - when we was out that night and he didn’t get in cause he had trainers on - I ran back to the hotel got him a pair of shoes and came back, I was that fit!

Hillier is now 52 [just a year older than Keane] and regularly lines out in 'Masters' and legends fixtures. Now that Keane has laced up for the United Legends, one hopes we get to see him face off with Hillier to see if they can settle old scores.


popular
"Every team did it!" - Paul O'Connell on Roy Keane comment to Ronan O'Gara that he couldn't deny
Five confirmed changes and guidelines to have big impact on 2023 Six Nations
"It's crazy to think Bundee Aki might come straight in and start against Wales"
Everton release brutal 59-word statement to confirm Anthony Gordon departure
Owen Farrell praises Johnny Sexton in revealing interview ahead of Six Nations
British publication urges Gareth Southgate to claim Evan Ferguson for England
CCCC order replay of All-Ireland club football final
You may also like
3 days ago
Roy Keane flatly rejects longstanding perception of ex-Man United midfielder Paul Ince
5 days ago
Roy Keane on Man United's two most improved players since Ronaldo left
5 days ago
Roy Keane on how Lisandro Martinez is a step above 'modern defenders'
1 week ago
Troy Deeney says Harry Maguire's agent contacted him after comments about the player
1 week ago
Cristiano Ronaldo told Jorge Mendes they were 'done' if he failed to find big transfer
1 week ago
Quiz: Name the Argentina players to have scored for Man United in the Premier League
Next Page