"I hit a little white ball around a field sometimes."

So reads Rory McIlroy's Twitter bio, what it does not say is that hitting that little white ball around a field is an incredibly lucrative activity.

The golfer, who turned 28 on Thursday, is currently enjoying his honeymoon after marrying Erica Stoll at Ashford Castle last month.

There was bleating from some quarters about McIlroy's decision to keep his wedding completely private but, those complaining should be happy McIlroy chose Mayo for the star-studded nuptials.

Going by the latest Sunday Times Rich List, the Holywood native could have got married on the moon if he fancied it.

McIlroy is richer than King Croesus and Scrooge McDuck combined, adding a whopping €30million to his fortune in the past 12 months, according to the newspaper.

We should be thanking Rory McIlroy after he took one for the team, writes @dionfanning https://t.co/auZ9dGVpio 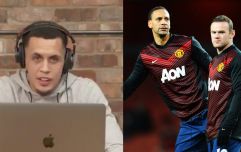 END_OF_DOCUMENT_TOKEN_TO_BE_REPLACED

Nike abandoning the golf equipment business has also opened up new club and ball endorsement opportunities for the Irishman, who penned a $100m contract extension with Nike - who will continue to provide his clothing and shoes.

McIlroy is fifth on the sporting rich list, behind formula one driver Lewis Hamilton (£131m), with Manchester United's veteran striker Zlatan Ibrahimovic a new entry at two, with a fortune of £110m.


popular
'War-scene' in Tyrone dressing room before 2005 final sums up an iconic team
We knew Sean O'Brien wouldn't let us down with his Lions XV
Bill Shankly’s grandson asks for statue to be removed from Anfield
Keith Earls backed for Lions XV by one of the best in the game
The SportsJOE 12 o'clock quiz | Day 335
'Make him hurt, make him yours' - How the Springboks ruled the world
Springboks legend Tendai Mtawawira tells us what he really thinks of Ellis Genge
You may also like
3 months ago
QUIZ: Identify which of these 50 footballers played with Wayne Rooney
2 years ago
Antonio Valencia appears to confirm his next club on Twitter
2 years ago
Wayne Rooney sent off for abysmal tackle with DC United 3-0 down
2 years ago
Wayne Rooney believes Louis van Gaal was tactically better than Sir Alex Ferguson
2 years ago
Wayne Rooney smashes home hat-trick in 5-0 thumping for DC United
2 years ago
Wayne Rooney wants Solskjaer or Pochettino as Man United manager
Next Page