"They've given everything of themselves."

Referee Matej Jug will not be forgotten any time soon by Irish players, supporters, or their manager, Stephen Kenny.

The Slovenian referee was centre of attention for much of a fraught night in Faro, with both Irish and Portuguese fans cursing him at times.

END_OF_DOCUMENT_TOKEN_TO_BE_REPLACED

Jug awarded Portugal an 11th minute penalty but it was missed by Cristiano Ronaldo, who was lucky that his strike on Dara O'Shea was blithely ignored.

As Ireland frustrated the hosts and then counter-attacked effectively, the home fans were getting more and more frustrated with Jug and his assistants. The referee warned John Egan for what he deemed to be time-wasting as earlier as the 18th minute, booked Aaron Connolly for persistent fouls and then allowed Portugal an extra minute to finish an attack at the end of FIVE additional minutes in the first half.

After the break, he denied Ireland two penalty shouts - one very strong, the other a close call - and awarded Portugal a number of free-kicks around their box. He booked Matt Doherty not long after he was fouled, but also annoyed Cristiano Ronaldo for not awarding a free against Shane Duffy.

Pressured by Portuguese players and fans, three weak penalty appeals went through VAR and all were dismissed.

Ireland had two penalty shouts, through Aaron Connolly. One could have been given. The other was described as "stonewall" by Damien Delaney, and it was hard to argue:

"That is a stonewall penalty!"

In the closing stages, Jug awarded Portugal a free-kick when a strike from outside the box hit the arm of Josh Cullen (down by his side). Jug awarded a free for that, but Gavin Bazunu saved that.

END_OF_DOCUMENT_TOKEN_TO_BE_REPLACED

The ball went out for a corner that Portugal took, and it was cleared. All the while, and from as early as the 85th minute, Stephen Kenny had been trying to get subs Jayson Molumby and James Collins on the pitch.

With Portugal pressing, and not stopping for Irish subs, the officials did not hold up play. It was a frustrating aside, but the Irish players will kick themselves for not clearing the danger before a cross came in for Ronaldo to head home an equaliser.

Kenny was going ballistic, down on the sidelines, as the Irish subs were only permitted to come on AFTER the equaliser.

Ireland pressed for a winner when James McClean forced a corner with a low drive. Portugal cleared their lines and eventually piled forward seeking their own chance to snatch all three points.

Kenny was insistent that there was a Portuguese foul on one of his players in the lead-up to what would be their winning goal. As it was, Jug did not spot it and, again, allowed the game to play on past time allotted for injuries or hold-ups.

There were supposed to be five minutes of injury time played, but Ireland could not clear their lines and Ronaldo scored the winner - and his 111th international goal - with the clock at 95:22. 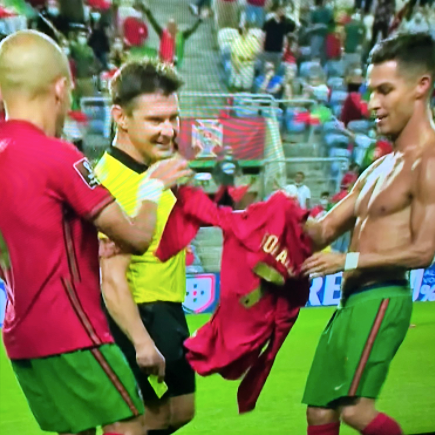 The ref booked Ronaldo for removing his jersey in celebration. It means he will miss his next game, but it was too late for Ireland.

There was time only to restart before Jug blew for full-time. Unused sub Harry Arter was chirping, unhappily, on the sideline but most Irish players were too spent to complain.

Post-match, Kenny spoke with Tony O'Donoghue of RTÉ and expressed his displeasure with Jug for that late Portugal winner. He commented:

"I can't see how they missed the chance to give us a free-kick, right at the end, before the goal.

"We were only a few minutes away from what would have been, probably, the best victory in the Republic of Ireland's qualification history, in terms of games away from home.

"Absolutely gutted. Just gutted for the players. They were heroic out there, in how much they left out there. They've given everything of themselves."

With three losses from three, now, in the World Cup qualifying campaign, Ireland are all but out of the picture.

Up next are Azerbaijan and Serbia at home, on Saturday and Tuesday. An element of pride has been restored after March's loss to Luxembourg, but Ireland could seriously do with a win, and soon.