According to Roy Keane, Paul Pogba is a "big problem" for Manchester United. On Sky Sports' coverage of the Manchester derby, Keane verbally eviscerated Pogba before a ball was kicked on the night. His successor in the United midfield then did nothing to prove him wrong during the 2-0 loss to Manchester City.

However, it looks like Keane's former club may have found a solution to their Pogba "problem."

"I wouldn’t believe a word he says. There is no meaning behind it. I don’t even think he believed what he was saying there. "He’s on about being a teammate, if you’re going to be a good teammate you’ve got to run back when you’re defending. "It all got a bit heated after the game against Everton, I heard they were throwing their hair-gel at each other. It got that heated." Roy Keane on Paul Pogba and the Man United squad 😯

According to Fabrizio Romano, writing in The Guardian, Juventus are interested in re-signing the French midfielder and have held talks with his agent. It is understood that United are reluctant to lose Pogba, who re-joined the club from the Italian champions in 2016 for a then world record fee of £93m.

However, Pogba may look to leave Old Trafford for a second time this summer, particularly if the club misses out on qualification for the Champions League. United would reportedly accept a bid of €130m (£112m) for the midfielder.

Juventus would need to sell two or three first-team players - such as Miralem Pjanic and Douglas Costa - to fund the transfer. But they are keen and reportedly want to make a marquee signing this summer, just as they did last year when they signed Cristiano Ronaldo from Real Madrid. 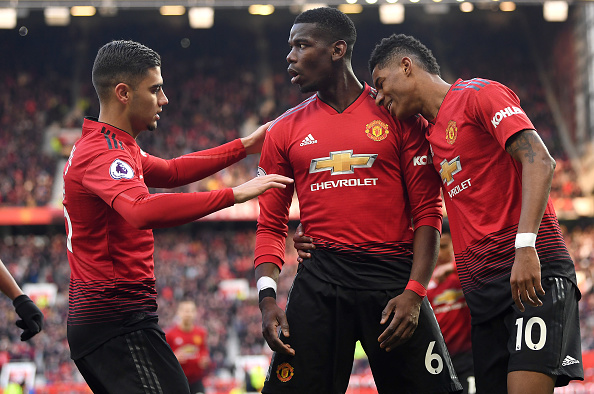 END_OF_DOCUMENT_TOKEN_TO_BE_REPLACED

Pogba played for Juventus between 2012 and 2016, winning the Serie A title in each season. Since returning to Man United, the French midfielder has helped the team win the Europa League and the League Cup.

He was also named in the PFA Team of the Year for the current season, despite his form dropping off over the last six weeks. Pogba's best spell of form in a red shirt came in the period following Ole Gunnar Solskjaer's appointment as caretaker manager last December.

Real Madrid have also been linked with a move for the midfielder.


popular
Carragher pushes all the right buttons and Keane delivers in gold
Jermaine Jenas' reaction to Eamon Dunphy punditry is absolutely hilarious
Ireland name team to play England
Conor McGregor's next fight narrowed down to two options
Rovers to continue Direct Provision initiative for 2020 season
"At the end of it, you're just saying, 'thank God I didn't block that ball down'"
Joe Canning's gym routine features four very simple exercises
You may also like
2 days ago
Harry Gregg: the goalkeeper who saved a family
3 days ago
Three players Solskjaer wants compared to three Man United are after
1 week ago
Nigeria watches on as Odion Ighalo's Man United dream begins
3 weeks ago
Woodward must "prove us all wrong", not Sanchez
3 weeks ago
Fall guy Solskjaer is not going anywhere
3 weeks ago
If Twitter had been around for Eric Cantona's kung fu kick it might have looked something like this...
Next Page