Good to see he took the defeat well.

Video footage has emerged on social media of Neymar appearing to hit an opposition fan in the Stade de France on Friday night after Paris Saint-Germain's shock defeat to Rennes in the final of the Coupe de France.

PSG blew a 2-0 lead against Rennes and lost 6-5 on penalties after Kylian Mbappe was sent off two minutes before the end of extra time for a horrific tackle.

Neymar appeared to take issue with a fan filming the PSG team walking up the stairs to collect their runners up medals. The Brazilian forward stopped on the staircase and confronted the fan and has been accused of striking him.

Neymar's marketing adviser, Alex Bernardo, commented on the incident on Instagram, claiming that the fan's provocative comments were unacceptable.

"I'm not going to discuss whether it is the most correct way to resolve the matter," he said on Instagram. 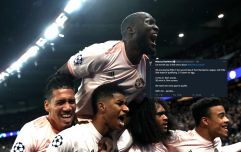 END_OF_DOCUMENT_TOKEN_TO_BE_REPLACED

"But that was Merit, it was! See what the "fan" said AND RECORD!! "Buffon you're retarded", "Kurzawa I do not want your compliments", "Verratti racist", "Neymar, you fuck, learn to play football."

"This is the kind of behaviour that can not be admitted. Hot-headed players after losing a championship final and an IDIOT provoking them."