Karim Benezema's ears must be burning this morning.

The Real Madrid striker has tried to keep a low profile over allegations that he tried to blackmail his France teammate Mattieu Valbuena over an alleged sex tape.

The Lyon player has also kept his counsel on the entire sordid affair until this morning when he's given the striker an absolute pasting in an interview with Le Monde.

French website OL News  has translated the interview and have conveniently tweeted the best parts to explain the whole affair.

Valbuena first explains the background to the sextape becoming public.

Valbuena's video may have been stolen on his phone by a acquaintance of his who was helping him with some technical stuff.

He then explains how Djibril Cisse got involved in the entire mess.

Valbuena first got a phone call in May 2015, by Djibril Cissé, warning him that he heard something about him, but hadn't seen the video.

Cissé taled to MV about how difficult this position was b/c he was in the same in 2008. Cissé just let MV know - no blackmail/

The midfielder then claims he is not even sure if there is a video at all.

"When I asked for proof, Ii didn't get anything. I may have done videos but who knows, they may have nthg. They maybe saw sthg that's it"

The France international then revealed how he first was contacted by the alleged blackmailers.
He received a phonecall in June asking him to meet an unknown man in Dubai but the player informed the police straight away.

"I didn't try to arrange anything with that person. I have values and I will not be played with."

The plot then gets thicker than a big bowl of custard as Valbuena reveals he was told by police that it was expected someone within the France squad would try to speak to him about the alleged blackmail. 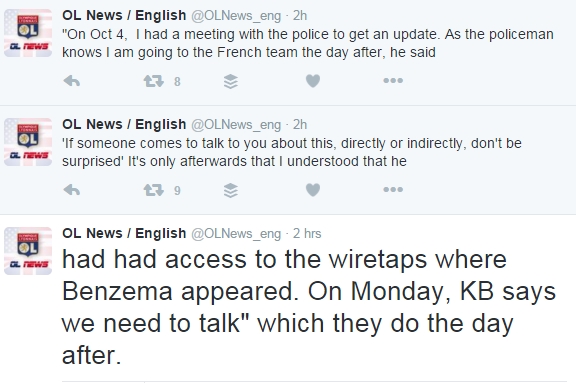 Valbuena then realises that Benezema is involved in the plot. 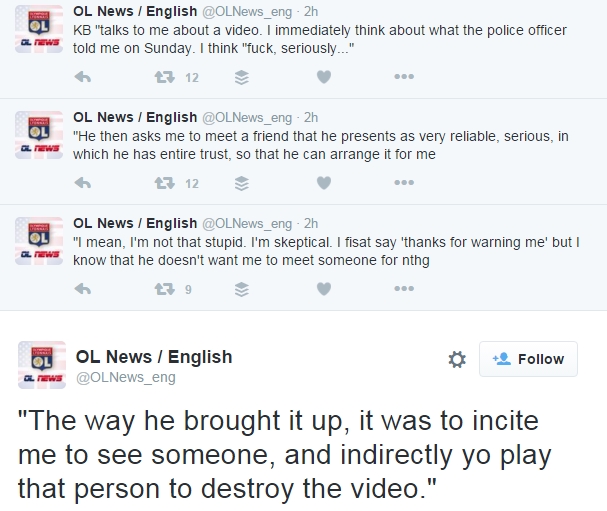 KB "insisted a lot for me to meet his friend. He was not aggressive, he didn't talk about money, but when you insist like this... pfff."

The midfielder then goes on to detail various discussions between the two players and how disappointed he was about Benezema's alleged involvement.

"I can't defend the indefensible. I wouldnt do this, even to my worst enemy."

MV, about KB: "I can only be very, very, disappointed & note that the relationship with him is not as sincere as he may have let on." 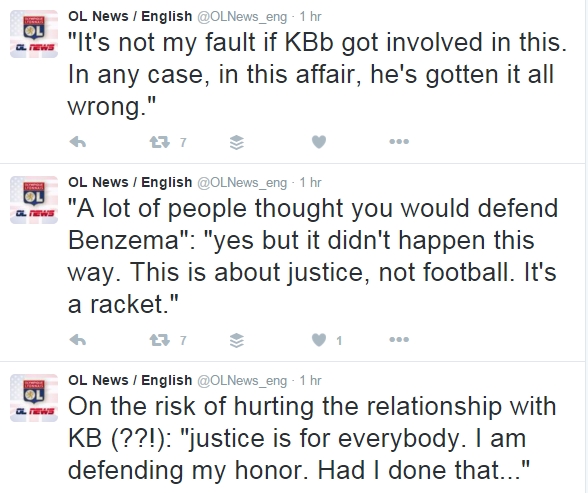 The last word on the matter is how would the two payers react if they were once again to be international teammates.

Valbuena shows reamarkable maturity to admit that he could play with the striker again, but with reservations. 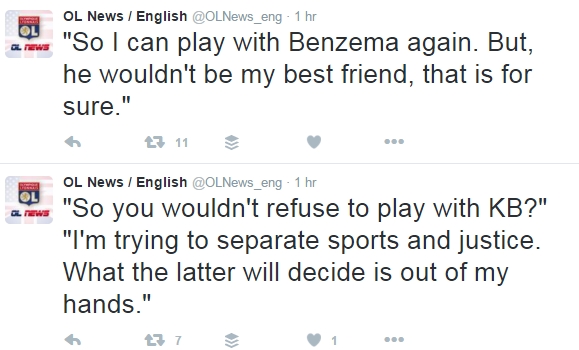 
popular
From Canada to Carlow in the name of hurling: Nicolas Redmond's journey to the Fitzgibbon Cup
Chelsea forced to change Stamford Bridge changing room after Liverpool complaint
Jesse Lingard 'angered by lack of respect' shown by Man United
Kerry's captain selection for 2022 sums up the problem with their outdated system
"It must be difficult to say no, having won a game and heading back together"
"Oh my God!" - Anton Ferdinand on Roy Keane's infamous half-time rant at Ewood Park
"I have to come into this camp and do what I can to get the No.2 jersey" - Rob Herring
You may also like
10 months ago
WATCH: Benzema with a stone-cold stunner to save Madrid's blushes
3 years ago
Michael Owen speaks about the player Man United wanted to sign instead of him
3 years ago
Karius gifts Benzema the strangest Champions League final goal ever
3 years ago
Reports indicate that Gareth Bale could start for Real Madrid
3 years ago
Bayern Munich goalkeeper commits worst goalkeeping error of the season against Real Madrid
3 years ago
The penalty that Cristiano Ronaldo didn't score is the one that actually sums him up
Next Page