Lyon have confirmed via Twitter that Mathieu Valbuena is alive and well after rumours appeared on social media claiming that the French international died on Sunday.

Capped 52 times by his country, Valbuena was last seen for his club on October 24 against Guingamp. Having suffered a dislocated shoulder in the match, he was stretchered off in tears.

Fortunately for the 32-year-old, dislocated shoulders - although very painful - don't lead to death, and Lyon have made it clear that they are far from impressed with such rumours appearing on Twitter.

'Mathieu Valbuena is happily alive and well despite what those despicable individuals are spreading on Twitter," the first of two tweets from the club read.

'Lyon are horrified at such disgraceful and inhuman acts,' the club added.

Let that be the end of that one then. 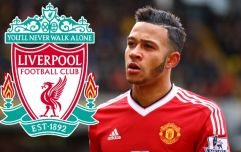 END_OF_DOCUMENT_TOKEN_TO_BE_REPLACED

Valbuena, who has been with Lyon since returning to France from Dynamo Moscow last year, is expected to remained sidelined by his injury for several more weeks.

The former Marseille player returned to the French squad in September having missed out on Euro 2016, and already has one World Cup Finals goal to his name after netting against Switzerland in 2014.


popular
From Canada to Carlow in the name of hurling: Nicolas Redmond's journey to the Fitzgibbon Cup
Kerry's captain selection for 2022 sums up the problem with their outdated system
Jesse Lingard 'angered by lack of respect' shown by Man United
"It must be difficult to say no, having won a game and heading back together"
Chelsea forced to change Stamford Bridge changing room after Liverpool complaint
Outrage after Sadio Mane allowed to play on for 10 minutes after being knocked out
Roy Keane has heaped praise on Trent Alexander-Arnold
You may also like
1 month ago
'The Human Bulldozer' stars in most brutally devastating try of 2021
2 years ago
Max Deegan makes Six Nations statement as Leinster crush Lyon
2 years ago
Former United winger Memphis Depay open to returning to Manchester
3 years ago
Memphis Depay shuts down Saint-Etienne fans for their cruel banner
3 years ago
Paddy Jackson linked with a move away from Perpignan
3 years ago
Moussa Dembele receives backlash after posting strange goodbye to Celtic fans
Next Page