"We managed to do that from the beginning, which made the game a bit easier."

Mo Salah and his Liverpool teammates knew they had Manchester United where they wanted them, before a ball was even kicked.

United went into their Premier League clash with Liverpool off the back of four defeats in their previous eight games, and having conceded 12 goals. They were going up against a Liverpool team that scored 36 goals in their 12 games, this season.

END_OF_DOCUMENT_TOKEN_TO_BE_REPLACED

Rather than trying to shore up a ropey defence, Ole Gunnar Solskjaer sent his side out to swing for the fences. He wanted his team to get after the Reds and press them hard. Liverpool saw them coming and ate them up.

One could analyse this game to death, but just look at how easily Andy Robertson leaves Mason Greenwood and Scott McTominay for dead for Liverpool's fourth goal. Down to 10 men, as Naby Keita was getting treatment, Liverpool's pass and move game opened United up far too easily.

After passing the ball to Diogo Jota [No.20], Robertson keeps going. He runs past Greenwood, who does not track him, and by McTominay.

Keep an eye out, too, for where Jota and Aaron Wan-Bissaka end up before Mo Salah [black arrow, below] scores. 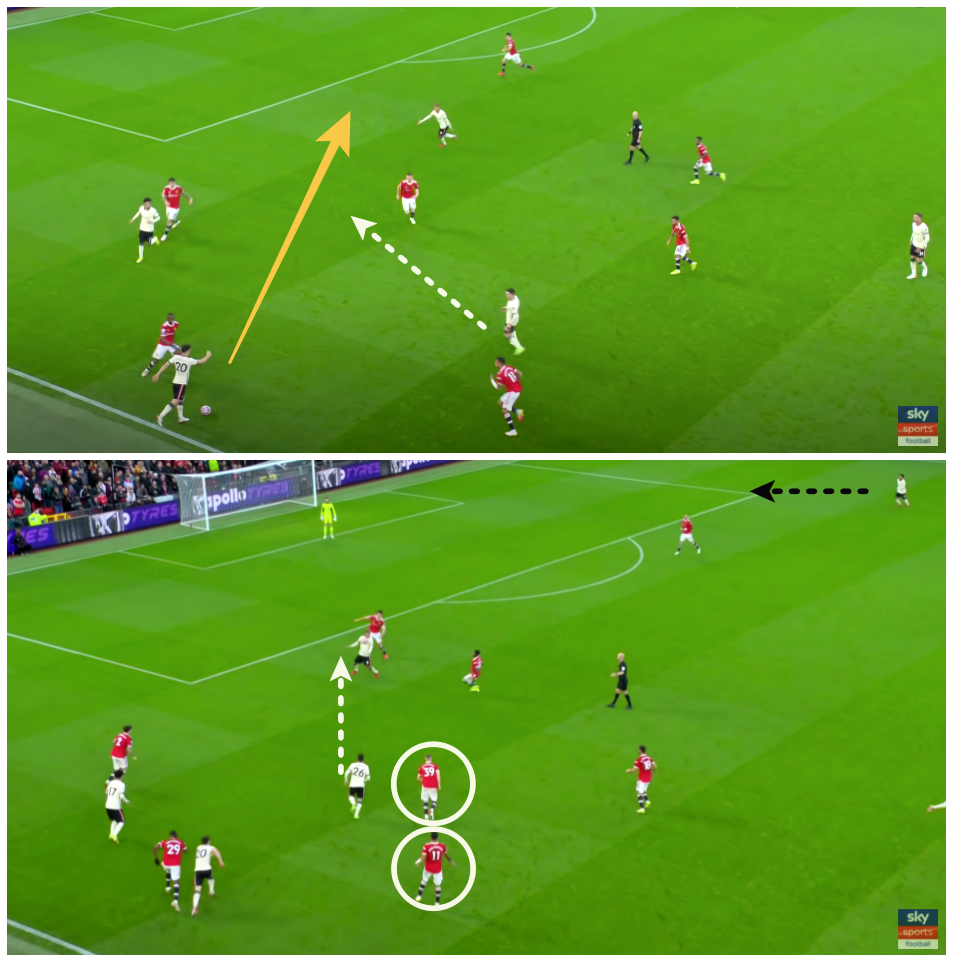 Roberto Firmino controls Jota's pass and gets the ball to Robertson before being bundled over by Harry Maguire. Victor Lindelof, who had been dragged wide by Curtis Jones, is running back into the box but Robertson gets his pass away to Jota.

Again, look where Lindelof and Wan-Bissaka are in relation to Jota, at this part of the move. Also note Greenwood and Bruno Fernandes watching on as the action unfolds [beyond the white line]. Marcus Rashford is also observing, instead of racing back to help Luke Shaw. 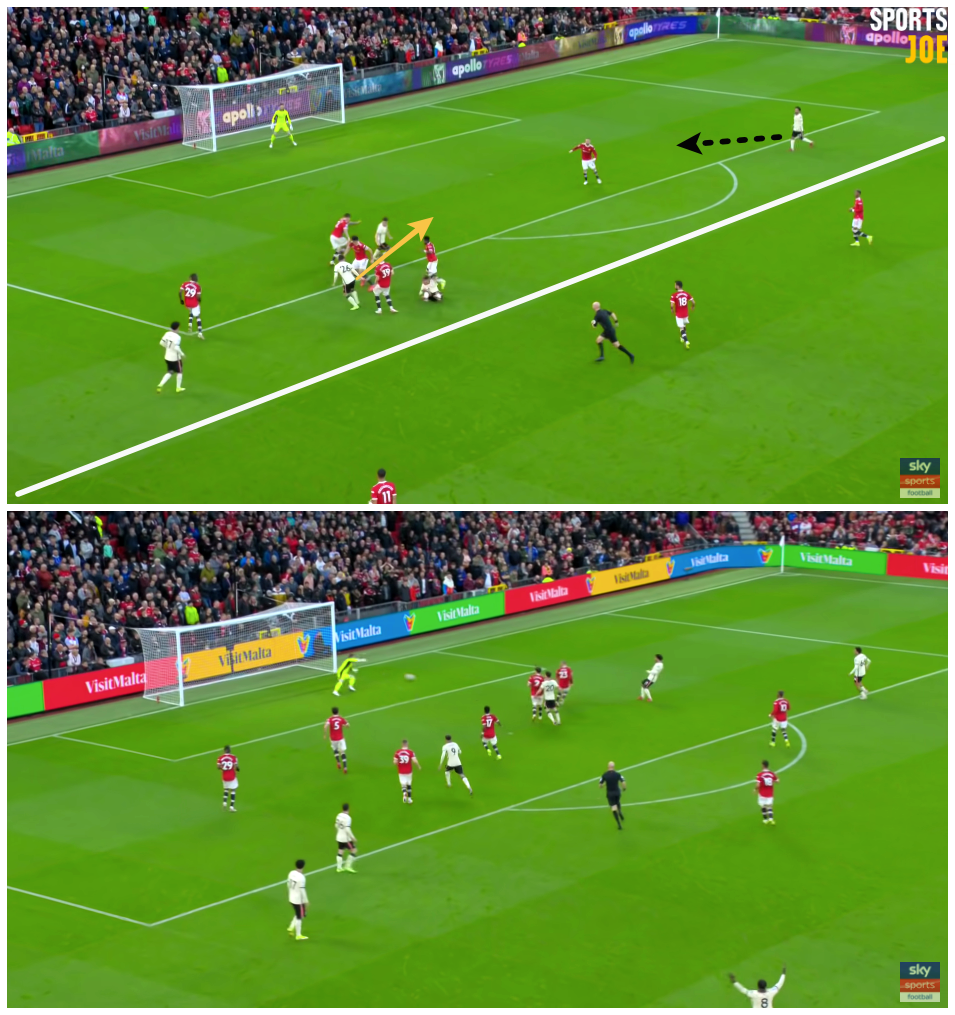 END_OF_DOCUMENT_TOKEN_TO_BE_REPLACED

It still needed a crisp, first-time finish from Salah but that goal was all about the energy and commitment of a Liverpool side already 3-0 up but hungry for more. You can watch how that whole goal played out here, from 1:19.

4-0 up by half-time, United were in free-fall. Liverpool have games coming up against Brighton, Atletico Madrid and West Ham in the coming weeks, but they were not easing off the throttle. Following the game, Mo Salah told Sky Sports:

"At half-time, we were talking in the dressing room about writing history. We were saying that we had to keep going, keep scoring goals and trying to score as much as we could.

"Chances like that don't come often so we just tried our best to win the game."

Sure enough, Liverpool went out and made it 5-0 after only 50 minutes of the game. It was the club's biggest Old Trafford victory against their old rivals for almost a century.

Salah was the man to get the fifth goal and, in doing so, became the first opposition player to score a hat-trick at Old Trafford in the Premier League era.

For Liverpool, who have now left United well in their rear-view, it was another three points in the league chase.

Chelsea and Manchester City are the teams Liverpool need to be concerned with. For Manchester United, watching this game back will be hard but wholly necessary if they want to jolt themselves back to life.


popular
Nigel Owens on most annoying players to referee (three of them are Irish)
"I trained with a guy that was born in 2004 the other day. We reckoned Earlsie could be his father!" - Peter O'Mahony
Six All Blacks but no Ireland players in world's top 20 list headed by Antoine Dupont
"I remember someone saying, 'This guy's the best of the lot of them. Just wait for him'" - Brian O'Driscoll
What is the story with Tyrone clubs' woeful record in the Ulster championship?
"I asked one question and lads slagged the arse off me!" - Johnny Sexton on Roy Keane chat
Longford GAA movie explores the tale so many young footballers can relate to
You may also like
3 days ago
Bruno Fernandes praises Fred after Brazilian scores winning goal in Man United win over Crystal Palace
3 days ago
Four talking points as Man United beat Crystal Palace in Ralf Rangnick's first match as manager
3 days ago
Raphael Varane opens up on playing alongside Harry Maguire
3 days ago
Trevor Sinclair predicts that David de Gea's time at Man United could end 'quite shortly'
4 days ago
Zlatan Ibrahimovic and The Curious Incident of the Juice in the Hotel Mini Bar
4 days ago
Everton fans plan 27th minute walk out in protest at Farhad Moshiri
Next Page