"God almighty, what brings you back?"

For millions of Manchester United supporters across the globe, they will be experiencing the same odd sensation today. They know what has happened, but they still haven't fully got their heads around it.

For some, it will come later today. For others, it will be a few days from now. And for others, still, the realisation may slap them in the face a few months down the line:

END_OF_DOCUMENT_TOKEN_TO_BE_REPLACED

Many will try move on with their lives, stay off social media as much as possible over the next few days, maybe even get out more and get some fresh air. Life moves on and so too must they, but one day soon it will hit them.

Fans of the club are experiencing their very own Bishop Brennan getting kicked in the arse moment. The shock is too raw. Liverpool coming to Old Trafford and absolutely humiliating their club. It will take a while to fully process.

The sad truth is this result is not the ground-shuddering shock it should be.

Weirdly, what helped many United fans swallow this latest shit-pill sideways is their club's recent form. Ever since Jesse Lingard's unfortunate back-pass against Young Boys, Ole Gunnar Solskjaer has presided over a scrub fire that he has not been able to stamp out.

Before Liverpool came to Old Trafford, United had lost four of their previous eight games and conceded 12 goals in the process. After the 4-2 defeat to Leicester City, Marcus Rashford observed that it's always a crisis at United if they lose one game. He neglected to mention they had also lost to Aston Villa, Young Boys and West Ham in the space of a month.

END_OF_DOCUMENT_TOKEN_TO_BE_REPLACED

On Wednesday, United were 2-0 down at half-time against an injury-hit Atalanta. They were roared on by large sections of the home crowd but booed off at the break. Asked about that booing after the game, Solskjaer answered by pointing out at a section of the Stretford End had applauded him as he headed to the tunnel. Head in the sand stuff, but he was buoyed by another exciting comeback win.

Paul Scholes watched United stage their second consecutive Champions League come-from-behind victory in the BT Sport studios. Host Jake Humphreys and guest Rio Ferdinand were "buzzing" from the 3-2 win, but Scholes still could not get over that shocking first half performance.

"People are going to say I'm miserable," he commented, "and I'll probably get slagged off by United fans. But I looked at that game thinking about Liverpool on Sunday. Maybe that's the wrong thing to do. I thought in that first half United were all over the place.

"They were disjointed. They had the two midfield players playing on their own. Now if you do that against Manchester City or Liverpool, at half-time it will be 3 or 4-0. You'll be out of the game and you're not coming back."

Scholes is now being hailed as a football genius but so are the hundreds of thousands [you could easily multiply that] who looked at the form Liverpool were in and how utterly all over the shop United were. WhatsApp, Twitter, Facebook, the whole lot, had been busy with predictions of a ruthless Liverpool coming to town.

By half-time it was 4-0. After 50 minutes it was 5-0. United's biggest stars, Bruno Fernandes and Cristiano Ronaldo, resorted to lumping into Curtis Jones while Paul Pogba didn't fancy it at all. Dispossessed on the half-way line for the 2,607th time since his United return, he then went studs up on Naby Keita. 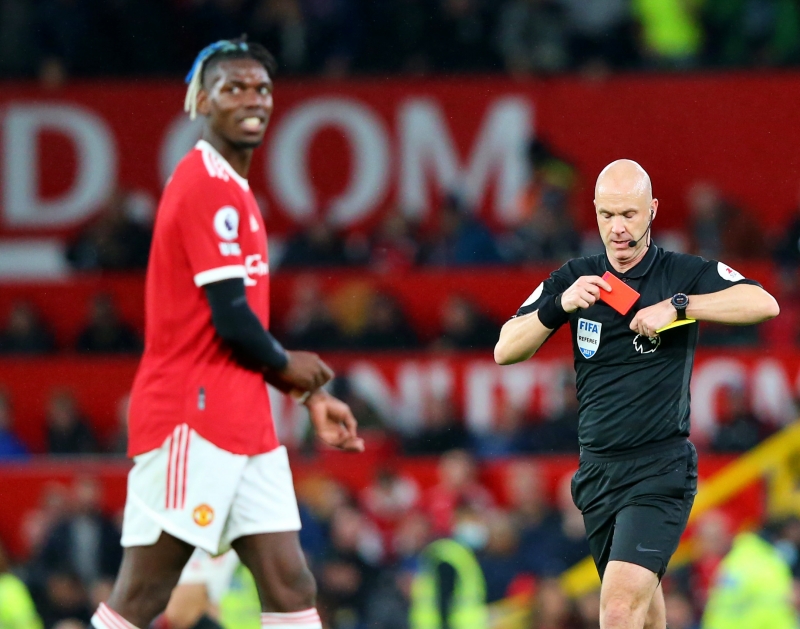 Paul Pogba walks off after getting red-carded against Liverpool. (Photo by Alex Livesey - Danehouse/Getty Images)

END_OF_DOCUMENT_TOKEN_TO_BE_REPLACED

United have been heading for an iceberg ever since they blithely went into the season without addressing the obvious need to get a new holding midfielder into the squad.

As one Liverpool fan - speaking from painful experience before the Jürgen Klopp years - recently put it:

'We're happy to have United just about doing enough to hang on until the next year to see if things improve and, hey presto, a decade is gone.'

They were linked with moves for Youri Tielemans, Declan Rice and Aurélien Tchouaméni. Instead, they kept Jesse Lingard and still paid Borussia Dortmund €85m for Jadon Sancho. They signed Raphaël Varane too - that should turn out to be a smart move - then let pride and vanity convince them they could not let Manchester City have Cristiano Ronaldo.

United were patting themselves on the back, years ago, for snatching Dimitar Berbatov from under City's nose. They repeated the dose with Alexis Sanchez and were left holding an empty plastic bag with a gaping hole in it.

It remains to be seen if City will have pulled off another masterstroke by NOT signing a player that United ended up getting. Ronaldo will continue to score goals for United, this season, but his arrival has thrown Solskjaer's preferred tactics out the window.

Following the 5-0 walloping at the hands of Liverpool, who preferred to toy with them over the last 30 minutes, Solskjaer was asked about his future at the club.

He gave a better answer to the BBC after what he called his 'darkest day'. "I do believe in myself, I do believe I am getting close to what I want with the club."

That smacked of the Bishop Brennans, too.

Solskjaer has taken a fierce kick up the arse for the whole world to see and is still in a state of shock.

When he snaps out of it, he may reflect that he has taken this footballing recovery project as far as he can.


popular
Nigel Owens on most annoying players to referee (three of them are Irish)
"I trained with a guy that was born in 2004 the other day. We reckoned Earlsie could be his father!" - Peter O'Mahony
"I remember someone saying, 'This guy's the best of the lot of them. Just wait for him'" - Brian O'Driscoll
Six All Blacks but no Ireland players in world's top 20 list headed by Antoine Dupont
What is the story with Tyrone clubs' woeful record in the Ulster championship?
"I asked one question and lads slagged the arse off me!" - Johnny Sexton on Roy Keane chat
Longford GAA movie explores the tale so many young footballers can relate to
You may also like
3 days ago
Bruno Fernandes praises Fred after Brazilian scores winning goal in Man United win over Crystal Palace
3 days ago
Four talking points as Man United beat Crystal Palace in Ralf Rangnick's first match as manager
3 days ago
Raphael Varane opens up on playing alongside Harry Maguire
3 days ago
Trevor Sinclair predicts that David de Gea's time at Man United could end 'quite shortly'
4 days ago
Zlatan Ibrahimovic and The Curious Incident of the Juice in the Hotel Mini Bar
4 days ago
"He's such a talented football player and he's not playing" - David Moyes on Jesse Lingard's situation
Next Page