It can be a bit daunting to meet your heroes, but Ronaldinho left his nerves at the door and handled it very well.

As if Tyrone didn't have it hard enough with all of COVID cases, and the prospect of facing David Clifford, it now looks like former Barcelona and Brazil star Ronaldinho is against them.

You can't help but picture him in the green and gold of Kerry, playing at half-forward with more dummies than a toddler, but lacking that initiative to track back.

However, away from fantasy land, Kerry's Paul Walsh has in fact met with the soccer icon, presented him a Kerry jersey, and then participated in a game of keepie uppies.

Look at our own Paul Walsh @BROSNAGAA over visiting the one and only Ronaldinho! Paul you might mention to him that he could win a house in Kerry if he buys a ticket here https://t.co/c5ky6E2sQR and then you could show him around the beautiful Kingdom #Ronaldinho #ReturnVisit pic.twitter.com/JhBnqjYVI5

The pair were pictured together at Ronaldinho's home in Rio de Janeiro, although it is unconfirmed how the pair arranged such a meet up. 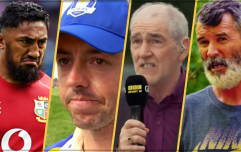 END_OF_DOCUMENT_TOKEN_TO_BE_REPLACED

The rumour on social media is that Walsh struck up a rapport with Ronaldinho's brother via messages on Instagram and the invite followed from there.

The 2018 Minor Player of The Year is truly living the dream, just casually kicking ball with one of the biggest names in sporting history.

Many are wondering if Walsh will return the favour, and invite the former Ballon d'Or winner to The Kingdom sometime.


popular
Frank Lampard pays emotional tribute to Seamus Coleman in front of Everton squad
No need for Sky Sports to apologise as Shane Lowry stays in PGA mix
Rory McIlroy in awe of "unbelievable" Tiger Woods but better off without him
Rangers legend says he and Roy Keane didn't speak during Man United spell
Steven Gerrard makes Liverpool admission ahead of Man City title decider
Dele Alli praises 'legend' Seamus Coleman after Everton avoid relegation
PSG offer Kylian Mbappe 'complete control' with insane contract offer
You may also like
2 days ago
Oisin McConville "hates" Tailteann Cup's northern and southern format
3 days ago
Tailteann Cup fixtures, dates and times confirmed by GAA
3 days ago
"County football isn't for everyone" - Down captain Barry O'Hagan hits back at criticism
5 days ago
Eamon McGee reveals what Rory Gallagher was like under Jim McGuinness
5 days ago
If you're going into battle alongside Gareth Mckinless, then you will always have a chance
5 days ago
Rory Gallagher absolutely loses his mind celebrating as Derry beat Monaghan in Ulster semi-final
Next Page