Carragher revealed the hilarious texts during an episode of The Overlap.

Jamie Carragher has revealed the hilarious texts his Sky Sports colleague Gary Neville sent to him on the final day of the Premier League season.

Both pundits were at Anfield and the Etihad Stadium last weekend as Manchester City produced an incredible comeback to beat Aston Villa and pip Liverpool to the league title.

END_OF_DOCUMENT_TOKEN_TO_BE_REPLACED

At halftime in both games though, it seemed as though Liverpool would have the advantage as City were surprisingly behind while Liverpool were level with Wolverhampton Wanderers.

Fearing his worst nightmare may come true, that the Reds would go on to win the league and move one step closer to a historic quadruple, Neville sent his concerns to his good friend Carragher. 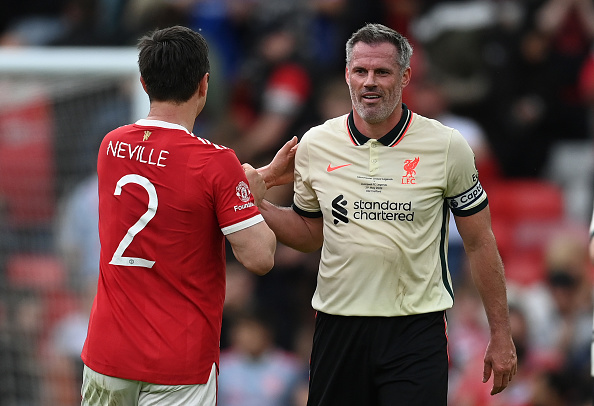 Carragher revealed the hilarious texts to the live audience.

END_OF_DOCUMENT_TOKEN_TO_BE_REPLACED

In a live recording of Neville's show The Overlap, Carragher dug out the messages, exclaiming that 'this had been going on all season."

"He tries to convince himself... here we are, I'll tell you what we'll do, we'll get his texts out from halftime. He's trying to kid himself."

Neville tried to protest his innocence but before he could, Carragher abruptly interrupted him saying: "Oh no, we're going through the texts': "***** City, you do your job, you'll win this. It's a f***ing disaster of monstrous proportions... I'm f***ing off if you win this!"

It would have been a disaster of monstrous proportions 😂

Cheers @Carra23 for sharing my texts to you 😂

Our end of season Overlap Fan Debate is out now , give it a watch if you like ❤️ https://t.co/cy2JoVO7Fu pic.twitter.com/BsnuvYucUp

Thankfully for the former Man United defender his dystopian nightmare that Liverpool would go on to win the league never came to fruition.

Jurgen Klopp's side did win 3-1 against Wolves but there efforts came to nothing as City rallied to come from two goals down and beat Villa 3-2 thanks to two goals from Ilkay Gundogan either side of Rodri's long-range strike.