What is a manager's dream?

A talent? A reliable? A no-risk, no-nonsense footballer?

Or is it someone like James McClean? Someone who's talented, yes. Reliable, yes. Absolutely and hilariously no-nonsense, of course. But he's still like a kid with a mind like a sponge, a restless zeal to just run, and a keen eagerness to follow instruction and take his reward from completing pre-arranged tactical objectives.

END_OF_DOCUMENT_TOKEN_TO_BE_REPLACED

People have tried to drop James McClean before - at Sunderland, at Wigan, even Tony Pulis at West Brom - whilst Martin O'Neill, one of his biggest fans, has constantly flirted with the idea of starting his fellow Derry man or not. He keeps grinding his way back into the set-up anyway - any set-up - and then guess what happens? He plays well so they play him again and then he plays well again so he starts again. Then those games amount to seasons and those seasons are going to amount to a career he can proud of. 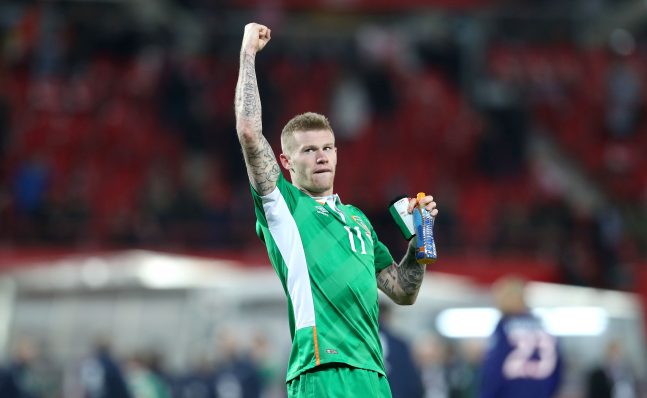 He's not the sort of boy to huff about it or make excuses though.

"I've been around four or five years now with the Ireland team and only now I seem to be starting to finally nail down a place and make that my own," he told Sky Sports after Ireland's 1-0 win in Austria.

"Look, you play on merit. You play by the performances you put in so I've just got to keep playing well and keep chipping in with hopefully a few more goals and keep pulling my weight."

McClean pulls his weight and then some. He pulls it so far that he forces the rest of the country to drag along with him.

"This island has a very big and a very real problem with the word 'no'" https://t.co/RHud0oMpx8

After his goal ensured Ireland would leave Vienna with three points in the bag, Seamus Coleman was pumped, roaring down the microphone talking about his team mates. McClean took the praise of the captain.

"We know we're going to leave it all out there," Coleman said.

"We ran our luck a few times, but the likes of Jonny Walters up top... James McClean, his back is hanging off him and he puts in a performance like that.

"He's really taken to the green shirt this last year maybe. Since the Euros, he's been brilliant. You know what you're going to get from James McClean."

You know what you're going to get from him.

Asked about that strike though, the one that meant Ireland left Austria with a competitive away win at a higher ranked side for the first time in almost three decades, McClean saw it a lot simpler.

He had no real choice in the matter.

"You know... if I had missed the target, I think Roy [Keane] would've killed me," the Derry native told Sky Sports.

"Roy hammers us in training about making sure we hit the target, he drums that into us. When I was going through, I was just thinking, 'you know what, if you hit the target you've always got a chance'.

"I managed to hit it sweetly and it flew through the 'keeper's legs and hit the back of the net so I'm delighted."

END_OF_DOCUMENT_TOKEN_TO_BE_REPLACED

You see, McClean doesn't really look at it like this historic event or the fact that he's the hero or flying in a rich vein of form for his country. He just thinks 'Roy Keane will kill me if I don't hit the target here'.

He just thinks 'Martin will kill me if I don't track back here.' He worries that Coleman will lambaste him for not doubling up or if the crowd will think he's trying any less if he doesn't pile forward for the 47th time with the ball.

He breaks it down into a series of tasks and he's told to complete them for his country. James McClean doesn't need any more motivation than that.

But when the game is broken down like that, how the hell could you be surprised that it was James McClean who stepped up and won it? After all, you know what you're going to get from him.


popular
Allan Saint-Maximin pays tremendous, heartfelt tribute to Steve Bruce after sacking
Shane Walsh: 'That's not how I was coached to play football. No one was coached to play football that way'
Spicy Donegal semi-final the highlight of a rip-roaring weekend of GAA on the tv
Seven exciting Ireland prospects pushing for November squad inclusion
"Ah, come on!" - Richie Sadlier and Didi Hamann couldn't even agree to disagree on Griezmann's red
Derry club win county final factfile games with extravagant set of jobs
"Where Johnny Sexton is so important to us now is being able to pass the baton"
You may also like
1 week ago
Claiming Callum Robinson has 'silenced his critics' with goals misses the point
1 week ago
Chiedozie Ogbene gives a brilliant interview after leaving Nemo Rangers behind to chase soccer dream
1 week ago
Callum Robinson performance shows Ireland what could have been
1 week ago
Adam Idah ready to play, but Ireland hit with late blow ahead of Azerbaijan clash
1 week ago
The Ireland XI that should get a much-needed victory in Azerbaijan
2 weeks ago
Callum Robinson says he is not vaccinated, despite having COVID twice
Next Page