Last night's Euro 2020 semi-final game blew up for several reasons. First and foremost, England are in a major tournament final for the first time in 55 years.

Secondly, we have Harry Kane's winning penalty, and all of the talk surrounding how it was won by England's talisman, Raheem Sterling. 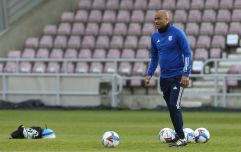 END_OF_DOCUMENT_TOKEN_TO_BE_REPLACED

While a lot of people called England lucky for winning the penalty, Italian newspaper Gazzetta Dello Sport have made some pretty serious assumptions about the reasoning behind the decision

They claim that the decision was a favour from UEFA due to Boris Johnson's perceived role in halting the Super League before it managed to get off the ground.

Gazzetta dello Sport piece says the "generous penalty" awarded to England "confirms the suspicions of a return of favour" to Boris Johnson for his role in stopping the Super League threat to UEFA. https://t.co/ej9d2xX70v

Football was “one of the great glories of this country’s cultural heritage,” Johnson said during the press conference at the time, adding: “How can it be right when you have a situation where you create a kind of cartel that stops clubs competing against each other?”

He also warned against clubs becoming “dislocated from their home cities, taken and turned into international brands and commodities that just circulate the planet, propelled by the billions of banks, without any reference to the fans and those who have loved them all their lives”.

The current health secretary Sajid Javid called for a unique tax to be placed on Liverpool, Manchester United, Manchester City, Arsenal, Chelsea and Tottenham Hotspur if they joined the Super League.

Dunno how they fixed the other nine or something goals we've scored though, fancy explaining that one? Getting excuses in early. https://t.co/GoS1haiTba