Haaland has joined a select group.

Erling Haaland's hat-trick heroics in his first Manchester derby have seen him become only the 14th player in history to be awarded a perfect 10 rating by L'Equipe.

The French outlet is a famously tough crowd to please when it comes to handing out 10/10 ratings, but the role the Norwegian played in helping City dismantle United at the Etihad on Sunday did the trick.

END_OF_DOCUMENT_TOKEN_TO_BE_REPLACED

Haaland scored twice inside the first half, also laying on the assist for Phil Foden - who also finished the game with three goals - to score his second before the interval.

United scored first in the second half to pull the score back to 4-1, before Haaland and then Foden completed their hat-tricks. Two late goals from Anthony Martial completed the scoring, with City maintaining their unbeaten start to the Premier League season.

In earning a 10 from L'Equipe, Haaland's name now sits alongside the likes of Lionel Messi and Robert Lewnadowski. 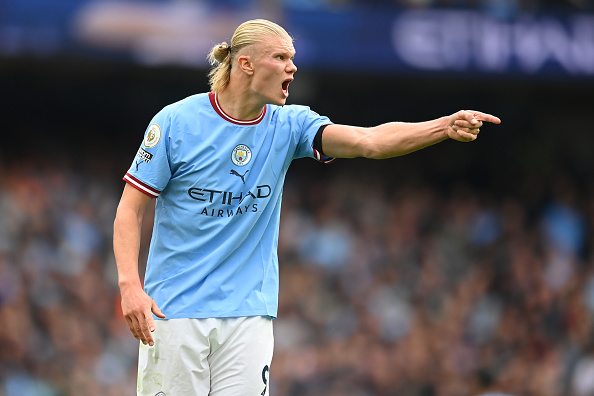 A full list of players to have earned a L'Equipe 10.

Perhaps this one passed you by, but an incredible goalkeeping display from Nantes' Alban Lafont against Paris Saint-Germain in February was, until Haaland, the most recent recipient of a L'Equipe 10. After his teammates had given Nantes a shock 3-0 lead over PSG inside the first half of the Ligue 1 game, the Burkina Faso-born 23-year-old repeatedly thwarted his soon-to-be fellow-perfect tenners Neymar, Lionel Messi and Kylian Mbappe. Only Neymar managed to beat him in the early minutes of the second half, helping his side record a famous 3-1 victory.

END_OF_DOCUMENT_TOKEN_TO_BE_REPLACED

Mbappe sealed his perfect ten with his four-goal turn for France in an 8-0 mauling of Kazakhstan in November 2021. The result secured Les Bleus' place at the 2022 FIFA World Cup in Qatar. Though the calibre of opposition might have been in question, you can only play what's in front of you, and Mbappe was unquestionably brilliant - scoring four but also laying on an unselfish assist for Karim Benzema.

You remember this one, don't you? Yes, Serge Gnabry became a recipient of a L'Equipe 10 after he spearheaded a ruthlessly efficient Bayern Munich attack against Spurs in the Champions League group game in 2019. The former Arsenal man bagged four goals on his return to north London as Bayern ran riot on their way to a 7-2 win.

Another Tottenham game, this time with slightly happier memories for those who hold the club dear, saw Lucas Moura inspire them to an incredible Champions League semi-final comeback against Ajax, clinching their place in their only European Cup final. His side two down on the night at half-time and trailing 3-0 on aggregate, the Brazilian scored a second-half hat-trick, his final goal coming deep into stoppage time. Maurcio Pochettino cried and, frankly, watching that footage of the last goal again, who could blame him?

Three 10s in a matter of months? The L'Equipe lot really were feeling generous in 2019, weren't they? Again, though, this one is hard to argue against. Dusan Tadic, having joined Ajax the previous summer from Southampton, put on an inspired display to dump Real Madrid - eyeing their fourth European Cup on the spin - out of the Champions League. He scored his side's third in a 4-1 masterclass in the Bernabeu, but the role he played in their second of the night. Bursting through the Real midfield, nonchalantly pirouetting away from a flat-footed Casemiro then unleashing a perfectly measured pass for David Neres to put the Dutch side in the driving seat. Magic.

Four goals and a couple of assists for Neymar helped PSG thump Dijon 8-0 in January 2018, on their way to another Ligue 1 title. Not a bad night's work at all and a display worthy of a full 10 marks. He did, however, attract jeers from some PSG supporters for taking the penalty from which he scored his fourth, denying Edinson Cavani the opportunity to leap ahead of Zlatan Ibrahimovic as the club's all-time leading scorer. Still, at least he had that 10.

Not one of the more illustrious names on this list, but a five-goal haul for Nice against Guingamp helped Carlos Eduardo claim a little slice of footballing history. On a season's loan from Porto at the time, Eduardo had completed his hat-trick before the break, setting up a 7-2 victory.

Robert Lewandowski's four goals for Dortmund in the first round of their Champions League semi-final derailed Jose Mourinho's hopes of being the coach to clinch Real Madrid's Decima in 2013. Though the second leg became a far nervier affair than any Dortmund fan would've ideally liked, their Polish striker's brilliance in the first proved enough to see them through to a Wembley final against Bayern Munich.

Some of you may have clocked that, while L'Equipe have only ever handed out 15 Perfect 10 ratings, there have only been 14 recipients. It will come as no surprise to you that the only man to get two 10s is Lionel Messi.

The second came in the Champions League in 2012, when Messi helped himself to five goals as Barcelona hammered Bayer Leverkusen 7-1. It proved to be a record breaking year for goals for Messi, but his side's quest for another Champions League crown came up short in the semi-finals against Chelsea.

Messi's first came in a Champions League quarter-final against Arsenal. The tie was delicately poised after a 2-2 draw in the first leg in London, but a four-goal blitz from Messi ended the contest and L'Equipe's incredible 13-year spell without handing a single Perfect 10 rating. Just think of some of the players that missed out... wow.

Who, you might ask. And fair enough. Windfeld was not exactly a household name. A Danish goalkeeper, he never had a look in at international level thanks to a certain Mr Schmeichel, and spent a good chunk of his club career playing for Aarhus - that club Jack Wilshere briefly had a run out with.

He won the Danish Cup with them in 1996 and, the following year, put in such a fine display of goalkeeping excellence in a Uefa Cup tie against Nantes that he was deemed a worthy recipient of a 10/10 player rating. Aarhus were able to seal a slender win over the French club, taking them through to the next round after a 2-2 drawn in Denmark. And look, it really was an astonishing display, just as you'd expect given no more 10s were given out for another 13 years...

Oleg Salenko, a name football stat nerds will instantly recognised, shared the golden boot for the 1994 World Cup, after scoring six times at the tournament. Four of those came on one afternoon in California, as Russia thrashed Cameroon 6-1. It wasn't enough for Russia to progress from the group stage, however, with defeats to Brazil and Sweden in their two previous games sealing their elimination before a ball had been kicked.

France's triumph at the 1988 U21 European Championships was, a whole decade before their senior side won the World Cup on home soil, seen as quite a big deal by L'Equipe. How do we know this? Well, because their win against Greece in the final was enough for the outlet to hand out not one, but two Perfect 10s. The joint most eye-catching performer that day was Sauzee, who scored two of France's three unanswered goals. He would later graduate to the senior squad, but didn't feature for them in 1998.

Yes, the other man to get a 10 that day was goalkeeper Bruno Martini. He turned in an accomplished display between the sticks to keep a clean sheet that day, ensuring that, for the only time in history, L'Equipe gave two perfect ratings in a single game. We can safely assume that won't be happening again any time soon.