L'Equipe hold nothing back with Manchester United's player ratings

L'Equipe are notoriously harsh with their player ratings and they've had a field day with Manchester United following their defeat to Barcelona on Tuesday night.

A brace from Lionel Messi and a wonder goal from Philippe Coutinho at Camp Nou added to Luke Shaw's own goal at Old Trafford last week to leave little doubt about which side deserved to progress to the Champions League semi-final.

Several United players were found wanting in the return leg and Red Devils manager Ole Gunnar Solskjaer admitted that his side was several levels below Barcelona.

"That's the quality we have to aspire to," Solskjaer said in his post-match interview.

"If we want to get back to Manchester United's true tradition and level we have got to get to challenge the Barcelonas, and I've got to say they were a couple of levels above us in those 90 minutes and at Old Trafford.

"We want to play these games next year so we've got a massive week coming up and now we have to concentrate on the league." 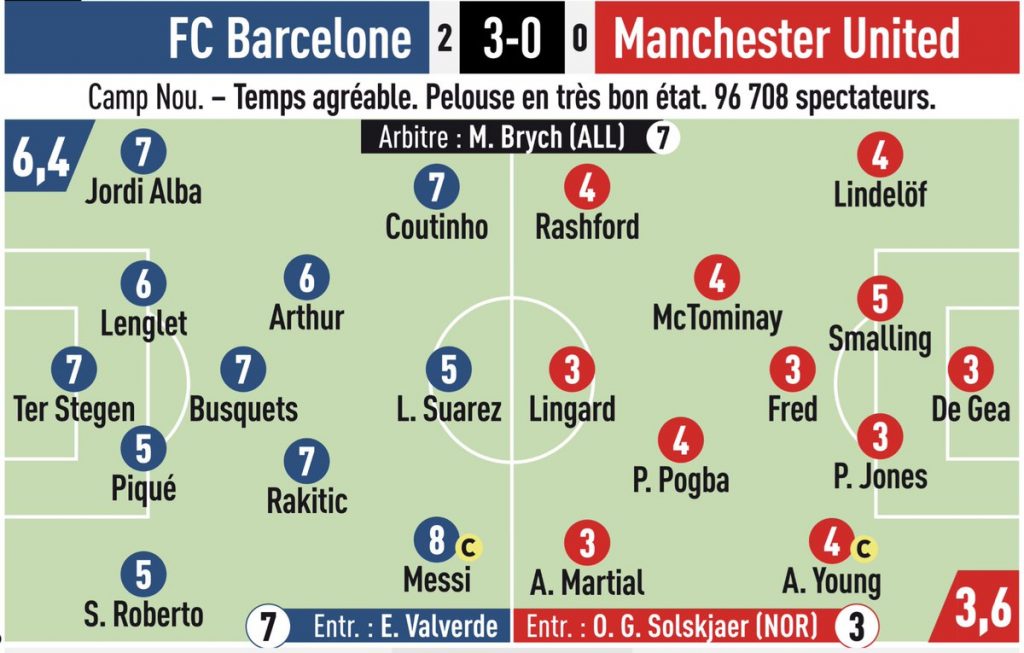 END_OF_DOCUMENT_TOKEN_TO_BE_REPLACED

The player ratings from L'Equipe will not make for pleasant reading for United's players as the French outlet only saw one performance worthy of a 5, which went to Chris Smalling.


popular
Can you name every English football club that begins with 'W'?
James Haskell on text exchange with Peter O'Mahony after Ireland's victory over Scotland
The SportsJOE 12 o'clock quiz | Day 105
The SportsJOE 12 o'clock quiz | Day 103
Ronan O'Gara shares class Johnny Sexton story ahead of World Rugby awards
"Shane was just gifted. He could play centre back, centre forward, he had everything"
Fines and suspensions in Tipperary after stewards enquiry
You may also like
2 weeks ago
Uncomfortable truth about Roy Keane swipes at De Gea and Maguire
4 weeks ago
'I never liked Eric Cantona... but he was my favourite player' - Neil Ruddock
4 weeks ago
10 Liverpool players Manchester United fans loved to hate
3 months ago
The Ultimate Manchester United Treble-Winning Quiz
4 months ago
"The day Dean Henderson comes back, he's obviously fighting to play"
4 months ago
"I would have lynched him after that" - Roy Keane
Next Page