"He’s so talented but he constantly demands the best out of himself."

Erik ten Hag's 2017 comments about Cristiano Ronaldo have resurfaced following the Dutch coach's appointment as the next Manchester United manager.

On Thursday, Ajax coach Ten Hag was announced as the new Red Devils manager, and he will succeed interim boss Ralf Rangnick in the summer.

Many are questioning how Cristiano Ronaldo will fit into Ten Hag's plans, but it appears that the 52-year-old is a fan of the Portugal captain.

END_OF_DOCUMENT_TOKEN_TO_BE_REPLACED

Ten Hag spoke about Ronaldo during his time as Utrecht manager in 2017. He pinpointed Ronaldo's ability to time a header, which "takes thousands of hours in training."

The 52-year-old highlighted Ronaldo's talent whilst supplementing it with hard work. "His heading, his jump, his timing. That takes thousands of hours of training, like with his free-kicks and kicking technique," Ten Hag said.

"He’s so talented but he constantly demands the best out of himself. That's the difference with the subtop."

The Duch coach evidently admires the United legend, but both Ronaldo and Ten Hag may evaluate the situation in the summer, with the 37-year-old not a natural fit for his high-pressing style. Ronaldo has one year left on his contract at the club. 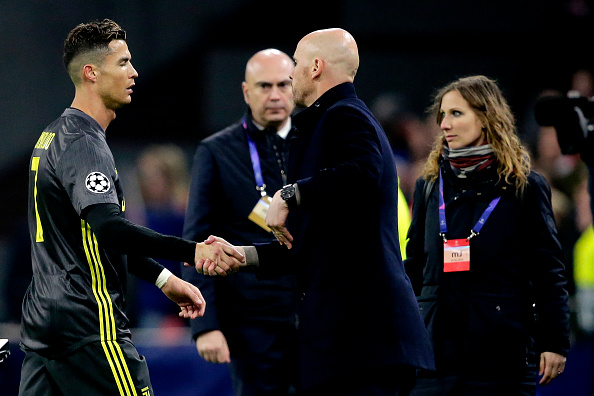 END_OF_DOCUMENT_TOKEN_TO_BE_REPLACED

Ten Hag put pen to paper on a three-year deal at Old Trafford. Mitchell van der Gaag will join Ten Hag as his assistant, having worked together at Ajax this season.

The current Ajax manager will be tasked with overhauling United's squad in the summer, with Rangnick suggesting that the club could need to make up to 10 signings this summer.

Ten Hag has a big job on his hands deciding which current members of the Man United squad warrant a place in his team for next season.

Questions have been raised about Ronaldo's future, however, the Portugal captain is United's top scorer this season with 21 goals in all competitions.