Cristiano Ronaldo sent a message during Manchester United's lap of honour after their 3-0 victory against Brentford at Old Trafford on Monday night.

Ronaldo converted a penalty in the 61st minute to double United's lead against Brentford, scoring his 18th Premier League goal of the season.

Speculation has been intensifying around the future of the 37-year-old following the appointment of Ajax manager Erik ten Hag for next season. 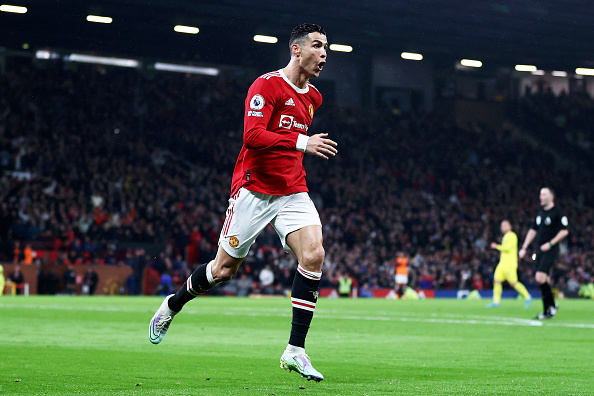 Ronaldo has been the Red Devils' most influential player this season with 24 goals in all competitions, however, it is still to be confirmed if the Portuguese star is a part of Ten Hag's plans.

END_OF_DOCUMENT_TOKEN_TO_BE_REPLACED

Following the five-time Ballon D'Or winner scoring his penalty past David Raya, Ronaldo pointed to himself, and then at the Old Trafford surface before performing his signature celebration.

The gesture from Ronaldo resulted in supporters speculating if the hand signals meant he'll remain at Man United next season.

Call us crazy, but we reckon this celebration means we'll see Ronaldo back at Old Trafford next season pic.twitter.com/lxqghnVagr

Ronaldo sends a message at full-time.

END_OF_DOCUMENT_TOKEN_TO_BE_REPLACED

The Red Devils are set to make wholesale changes to the squad in the summer following the arrival of Ten Hag. It's been reported that Ronaldo wants to play Champions League football next season, however, his message at full-time will give Man United fans hope that he'll stay.

The record all-time top scorer in football joined his Man United teammates in a lap of honour after the game in what was their final home game of the season.

Ronaldo appeared to say to the camera whilst applauding the supporters: "I'm not finished."

When walking off the pitch in his final home game for Man Utd this season, Cristiano Ronaldo appeared to send a message to the camera 👀pic.twitter.com/8zW02vGYgw

Man United fans will be hopeful that Ronaldo's actions during and after the game highlight the striker's intention to see out his contract which expires in 2023.

The victory leaves Ralf Rangnick's side in sixth place, six points clear of West Ham in seventh, as they look to secure Europa League football for next season with two games remaining.